Frontman Stephan Jenkins talks about the environment and making music on their own terms. Watch below! 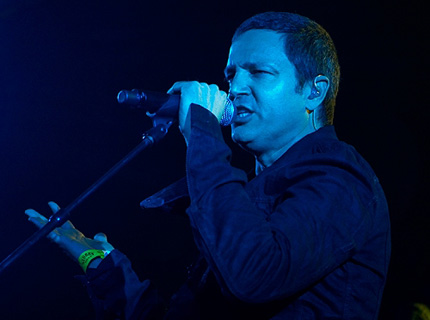 Seminal alt-rockers Third Eye Blind have been making music since the early ’90s, so they know a thing or two about staying power–and sustainability.

Frontman Stephan Jenkins, responsible for hits like “Semi-Charmed Life” and “How’s It Going to Be,” talks about the environment and making music on his own terms as part of the Green Room — a new series of exclusive video interviews, presented by SunChips and their new sustainable initiative. Watch the video, complete with concert footage from a recent show in New Jersey, below!

“I fly around on a floppy unicorn, I can do that with the power of love rainbows,” Jenkins jokes about reducing his carbon footprint. On a more serious note, “I think that we as a people need to bet on ourselves in developing clean energy and selling it to the world,” the singer-songwriter adds.

“I like that a lot of people are getting into the local foods initiatives — its a great way for people in the community to actually get together.”

3EB released their latest album Ursa Major on their own label, Mega Collider Records — and it debuted at No. 3 on the Billboard charts. “We’re very comfortable making our own decisions and having our own record label,” says Jenkins, “The people around us are all people who care about music and I like being in that kind of atmosphere because I’m still moved by rock music.”

3EB is currently on tour for a few dates in the U.S. before heading overseas. They’ll be back in the U.S. in May and will headline several dates of the Bamboozle Roadshow, alongside Good Charlotte and LMFAO. Check out the band’s site for the full itinerary.