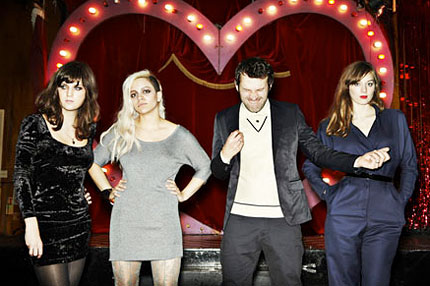 With their second release, The Optimist (out digitally tomorrow), the quartet pair brooding vocals and atmospheric flourishes with the synth-heavy disco beats that highlighted their first record, 2007’s Fantastic Playroom. Listen to an exclusive alternate version of their new track “We Want 2″ below!

Riding a punk bass line and sci-fi sounding beat, “We Want 2″ is punctuated by wind chime-like effects and lead singer Tahita Bulmer’s affective croon about being too heartbroken to party, which build to a crescendo before exploding in pure dance bliss — a perfect fusion of somber and fun.

“Its one of those weird ones that where the lyrics are quite sly but the tune is really happy and almost a bit naïve in comparison,” Bulmer told SPIN.com, “But we like that juxtaposition because it’s a sting in the tail.”

The song is NYPC’s response to the “New Rave,” a music explosion in New York and the UK. “We were supposedly part of that whole scene, but we’re basically quite geeky and we like hanging out in the studio and we’re not really massive party animals,” Bulmer says. “There’s also a very wide range of musical genres and artists who we’re inspired by and I think that we acknowledged that with this album; we explored our own love of music.”

Listen to “We Want 2″ below, then tell us what you think in the comment section.