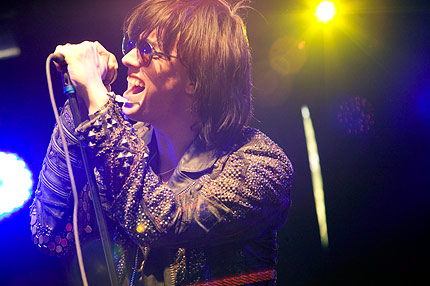 BEST KINDA-SORTA COVER: JULIAN CASABLANCAS
It’s getting increasingly inaccurate to refer to Julian Casablancas as a solo act. When he took to the stage in Coachella’s Mojave tent, he was backed by six additional players, including three on guitars, who helped realize his electronica-steeped songs in a way few had imagined possible. They also delivered a full-bodied version of the Strokes’ “Hard to Explain” which, dare we say, rocked harder than the original. A jab at Casablancas’ other band, perhaps? The strikingly minimal “cover” of Strokes B-side “I’ll Try Anything Once” seemed to suggest otherwise and, truth be told, the crowd went wildest for these two tracks, the weather-appropriate “I Wish it was Christmastime Today” notwithstanding. Chris Martins

BEST TRIUMPH OVER STAGE PLACEMENT: PHOENIX
You could also call it “Best Recovery” considering Phoenix’s hugely disappointing, glitch-riddled 2006 set in one of the outlying tents. Whether Coachella coordinators were worried about a repeat performance or reserving the main stage for Pavement out of deference to those indie rock originators, the French pop band turned the rest of the fest into a virtual ghost town. Their crowd stretched back a few hundred yards, brushing up against the Gobi tent, where Sly Stone should have been playing — had he not shown up four hours late. It was an ebullient scene — tens of thousands of happy bodies bopping to “Lisztomania” — but it was one that should have played out elsewhere. C.M.

BEST NEWCOMERS: THE SOFT PACK
?With a crack-of-Noon slot on the final day of a three-day, knock-down-drag-out in the desert, the Soft Pack might have faced an uphill battle getting anyone to show up for their gig in the Mojave Tent. But even with their self-titled debut album only two-and-a-half months out of the gate, these Southern California indie rockers have developed a reputation. And with pounding drums, driving guitars, throbbing bass, and simple but never simpleminded lyrics that call to mind early X, the Clash and just a touch of Sonic Youth, the quartet more than lived up to it.”You’re more talented than you know,” sang singer-guitarist Matt Lamkin on the infectious closer “Answer to Yourself.” Kind of like my new favorite band. Liam Gowing

BEST LIGHT SHOW: LITTLE BOOTS
You’ve got to give it up to Little Boots, a.k.a. Victoria Hesketh. First, a volcano robbed her of her wardrobe and stagehands (they were scheduled for a later flight). Then, Sly Stone’s failure to show left her saddled with the duty of entertaining a set of seriously pissed-off funk fans. While her cool, chipper electropop was no substitute for some white-hot psychedelic soul, Little Boots’ light show made for a worthy diversion. After copious amounts of fog were blasted into the atmosphere, lasers cut broad swaths through the air, cross-sectioning the thick smoke into surreal monochromatic planes. Better still, Hesketh later played those lasers by waving her hands over the beams — a proper tribute to synthpop legend Jean Michel Jarre. C.M.

BEST BRADFORD COX CAMEO: SPOON
Drawing on seven albums worth of minimalist pop masterpieces, Britt Daniels and his Spoon bandmates offered no shortage of memorable moments while rocking Coachella’s main stage. A great rendition of their effortlessly groovy 2005 breakthrough “I Turn My Camera On” was one. Keyboardist Eric Harvey managing to flip over his upright grand at the end of the band’s horn-powered 2007 hit “The Underdog” was another. But the funniest had to be Bradford Cox of Deerhunter (Spoon’s tourmates) popping up to play guitar on “Who Makes Your Money.” Well, okay, the guitar-playing itself wasn’t all that funny. But the skeletally skinny Cox donning Daniel’s big white cowboy hat and grinning like a child on Christmas morning as he rocked along with the band was priceless.L.G.

BEST DANCE COLLABORATION: THOM YORKE AND FLEA
Learning that Thom Yorke’s new band would be playing his 2006 solo record The Eraser all the way through wasn’t the most mind-blowing of revelations. Watching the Radiohead frontman dance like an unhinged madman to the wild slap-bass of a blue-haired Flea, however, was. And not just for the novelty effect. While the contributions of Atoms For Peace’s other high-profile members (producer Nigel Godrich and Beck drummer Joey Waronker) were considerable, the crowd’s focus was on the odd couple up front who consummated their budding relationship many times over in spastic bouts of deep groove. The encore, which included “Airbag” and “Everything in its Right Place,” peaked with an extended, funked-up jam on “Feeling Pulled Apart By Horses.” C. M.Read More From Coachella Day Three On Page 2 >>

BEST HARMONIES: LOCAL NATIVES
Combining propulsive tribal rhythms, chiming guitars, and an au courant songwriting style that lies about halfway between Vampire Weekend’s undigested Afropop and Arcade Fire’s anthemic chorales, L.A. quintet Local Natives created an intriguing sound before they so much as opened their mouths. But once they released their not-so-secret weapon — four vocalists who were all in touch with their inner Beach Boy — it was all over but the shouting. And there was plenty of that in the packed Gobi Tent, particularly after the band’s raucous closer, an ultra-dynamic tune called “Sun Hands” that seemed to infect listeners with an urgent need to throw their hands in the air and slap them together at regular intervals. L.G.

BEST LATE ENTRANCE: CHARLOTTE GAINSBOURG
What is it with French people and their fashionably late arrivals at Coachella? Charlotte Gainsbourg sauntered into the Gobi Tent a good fifteen minutes behind schedule — an eon in Coachella’s meticulously scheduled five-stage, 160-act universe. Were the quirky, groovy tracks she played from her recent release IRM any less brilliant as a result? No, they were still fantastic — thanks to Beck’s writing and arranging of them. Was Gainsbourg’s tribute to her father, ’60s lounge legend Serge, any less affecting? No, her cover of his “L’Hôtel Particulier” still oozed the sensuality and grace of the original. And her closer? Hell, if I know. I was on my way to see Spoon, who actually showed up on time.L.G.

WORST FOR YOUR EARDRUMS: RUSKO
Reigning dubstep king Rusko was able to fill the massive Sahara tent at 2:30 in the afternoon – more victims with charred holes where their ears used to be. The Los Angeles-via-London DJ and producer didn’t seem to have the space to execute his trademarkedly spastic dance moves, but the music was more than enough for the crowd. They responded to each massive bass drop with a flurry of swinging arms and waggling fingers. Whether accompanied by the pre-recorded vocals of Dirty Projectors’ Amber Coffman or by Rusko’s bright sound effects, the low end was low enough to shake bowels, which means it most likely cracked a few eardrums as well. C.M

BEST IMPROVISED SONG: DEERHUNTER
While his bandmates got tuned up to play the poppy epic “Never Stops,” Deerhunter frontman Bradford Cox grabbed his guitar and improvised a ditty directed at the crowd. “Coachella 2010 / Lots of people out in the sun, yeah / Lots of people trying to have fun / How many kids OD’d in the medical tent last night? / How many condoms broke at the hotel last night? / Supplying festivals of the future with their audiences.” Granted, the potential for that becoming the festival’s official theme song is small, but the message no doubt resonated with a handful of the enthused thousands (plus Spoon singer Britt Daniel) who gathered to watch the Atlanta art-rock crew do its thing. C.M.

BEST CROSSOVER DRIBBLE: B.o.B.
Though an MC rapping over a DJ doesn’t necessarily make for themost dynamic festival fodder, adding a full band to the mix for thesake of live performance isn’t always the most natural fit, either.But B.o.B, the nimble 21-year-old Atlanta rapper whose oft-delayeddebut album is finally coming out in a few weeks, not only makes thiswork, he plays acoustic guitar for good measure, all without feelinglike some gimmicky rap-rock hybrid. Steve Kandell

BEST NIGHTMARE FODDER: MIIKE SNOW
It’s good for bands to foster a little mystery, especially inthese oversharey times. So, kudos to these Swedish electro-popstersfor sprucing up their packed-to-the-hilt Sunday afternoon Mojave tentset with some dry ice and masks. (Maybe they team up with Fever Rayfor a bulk discount at the downtown Stockholm Party City?) But theimage of them in their affectless white plastic visages gave thevague, weird impression of being dancing along to a stage full ofMichael Myerses. S.K.

MOST UNLIKELY CROWD-PLEASER: YO LA TENGO
With 12 albums over the course of 26 years, the venerable Hobokentrio have no shortage of indie-pop earwigs to choose from inassembling a mid-day set on the main stage. Hence the presence of YoLa Tengo standards like “Big Day Coming.” But it was the 10-minute”Pass the Hatchet, I Think I’m Goodkind,” with its relentlessrepeated bass line that turns heads for sheer they’re-still-playing- that? entertainment value. Bassist James McNew is allowed abreather after that one. S.K.

Boombox-toting Yo Gabba Gabba! host DJ Lance Rock and his cadre of Day-Glo monsters joined King Khan and the Shrines on stage for a horn-blazing rock ‘n’ roll rave-up that partly made up for Sly Stone’s particularly unfunky performance later on. C.M.