The electro diva and the face of Blondie trade quips on sex, style, and the death of mystery. 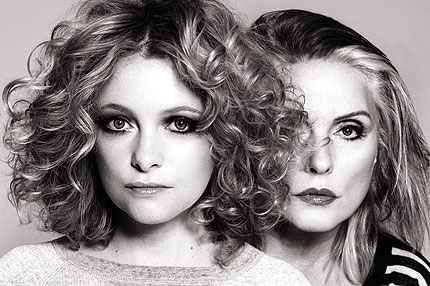 ALISON GOLDFRAPP: Do you have a favorite Blondie period, or is it all a big blur?

GOLDFRAPP: I didn’t get a record deal until I was 30. How old were you? You weren’t that young, were you?

HARRY: No, I was practically the same age. I started making music when I was 27 or 28, and we didn’t get a deal until I was probably 33.

GOLDFRAPP: That’s very inspiring. I remember when I was in my 20s and saying, “Shit, when is this going to happen?” And then I thought, “Well, Debbie Harry didn’t start until she was older, so it’s okay.”

SPIN: You’re both the public face of your bands. Does that ever cause friction?

HARRY: Well, I think it’s public knowledge that it’s been problematic for me.

GOLDFRAPP: Because you got more attention than the rest of the band?

HARRY: Early on, I think it made the guys insecure. Being part of an ensemble is difficult. I have a certain amount of loyalty to Blondie. We don’t fight like cats and dogs anymore, but we certainly have our positions. Traditionally, because [cofounder and guitarist] Chris [Stein] and I were a couple, it seemed impossible to separate what was coming from where. The majority of the musical ideas came from Chris, and I would try to throw some kind of lyric together. Nowadays, we don’t live together, so it’s different. And working as a solo artist has given me a confidence that I didn’t have with Blondie.

SPIN: Alison, have you ever worked with someone you’ve been romantically involved with?

GOLDFRAPP: I did once when I was a lot younger, and it was a bloody disaster. I remember thinking, “Wow, I’m never going to do that again.” Unfortunately, I somehow forgot that and worked with — actually, I don’t want to go into it. But it’s not advisable. The other person ends up trying to control you, and I’m not into that.

HARRY: It’s an ego thing. You have to leave room for the other person’s ego.

SPIN: Debbie, do you feel like music is less limited by genre than when you started out?

HARRY: Yes. I always hoped there would be this inevitable growth or blurring of borderlines. But our music stood the test of time. We were always proud of our urban influences.

GOLDFRAPP: We’ve never done the same album twice. Each one has been completely different.

HARRY: That flexibility is wonderful.

GOLDFRAPP: Can I get personal now? Do you think because of your age you should dress differently? I was doing an interview the other day, and the guy asked me, “Do you think you’re too old to be wearing short dresses?”

GOLDFRAPP: I was like, “Tina Turner wore short dresses, and my legs are quite good.” I didn’t realize there was an age limit for a hemline. What the fuck do you wear?

HARRY: I’ve gone through that dilemma. I had someone say to me, “You should just wear Chanel suits.” I tried. I wasn’t comfortable. For me, performance is about forgetting what I’m wearing. Just putting it on and knowing it’s right. I’d like to wear hot pants — honest, guys, I really would — but those days are gone.

GOLDFRAPP: When you’re onstage, the whole point is to forget yourself. I can’t always do that.

HARRY: Nowadays, everything is more, more, more. You gotta just whip it out. Did you see Fever Ray’s acceptance speech [at a recent Swedish awards show]?

HARRY: She wore this red burka, and when she made her speech, she took it off and had on this flesh-colored mask that looked like her face melted. Then she groaned into the microphone.

GOLDFRAPP: How extreme must one go? It’s almost competitive.

HARRY: It’s a rococo period. It’s hard to think of what to do next.

GOLDFRAPP: How do you get attention? I saw Lady Gaga in shoulder pads that came up to here [motions to her ears] and she looked like SpongeBob SquarePants.

HARRY: That’s her thing. She’s so good at it.

GOLDFRAPP: She is. Do you think of your era as being more adventurous?

HARRY: There was more mystery to it. You could do something and develop it and then surprise everyone. The Internet has changed that.

GOLDFRAPP: There’s no such thing as mystery anymore.

HARRY: No, and it’s so important. That undercurrent of the forbidden was always a part of rock, and now it’s not at all. Everything is totally mainstream. But I’m not against evolution.

GOLDFRAPP: Do you do a blog or Twitter or anything?

HARRY: I tried. When I was Twittering on tour, I found myself being a complete bore. The things I find interesting are really nasty and political and ironic and disturbing. “We got to our hotel, everybody got ready for the show, and we went back on the bus” — I’ve seen enough of that. Why would I want to read about it?

GOLDFRAPP: I started doing a blog. And I’m like, “Is this really interesting? Is it worth it?”

HARRY: You should just make it all up: “I checked in at the hotel, and I had to kill the desk clerk.”