The hard-rocking trio will hit the road in September for Blackdiamondskye, a month-long North American trek. 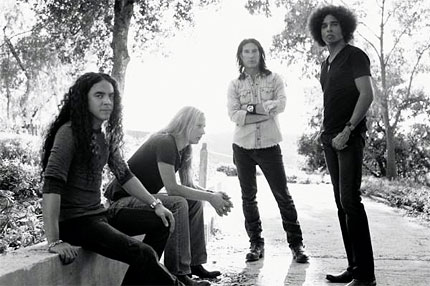 Alice in Chains, Deftones, and Mastodon have just announced plans to team up this fall for a month-long North American tour dubbed “Blackdiamondskye” — an amalgamation of the titles of each band’s new album: AiC’s Black Gives Way to Blue, Deftones’ upcoming Diamond Eyes, and Mastodon’s Crack the Skye.

The news arrives after a mysterious teaser video hit the web, splicing snippets of each band’s songs into a trailer of sorts, which had the metal and rock community stirring.

“Each band has its own unique flavor and the combination of all three will make for a great show and a good time on the road,” Alice in Chains guitarist/vocalist Jerry Cantrell said in a statement.

The triple-headed tour will kick off at Chicago’s Charter One Pavilion on September 16, then hit more than a dozen cities across the country, from New York to Seattle, plus a few outposts in Canada, before closing out October 16 in Las Vegas. General tickets sales begin May 22, while fan club members presale begins on May 10. See the complete tour itinerary below.

The tour follows a big year for AiC. Fans warmly welcomed the Seattle band’s reunion following the death of singer Layne Staley, pushing Black Gives Way to Blue to No. 5 on the Billboard 200 chart. Before the album’s release, Jerry Cantrell sat down with SPIN.com to discuss AiC’s reunion, new material, and their new addition, singer/guitarist William Duvall. Read the interview here.

Deftones, meanwhile, are preparing to release their sixth studio album, Diamond Eyes, on May 4. SPIN.com caught up with singer Chino Moreno in the studio as the band wrapped up recording efforts.

Mastodon have been touring behind their SPIN-approved concept album Crack the Skye for over two years — and each time they’ve blown us away. Read a live review of their show with High On Fire, Converge, and Dethklok (from the Adult Swim series Metalocalypse) here, and if you’re curious how the Atlanta band got their band name, guitarist Bill Kelliher explains.

Stoked to see the “Blackdiamondskye” tour? Tell us what you think of the lineup in the comment section.