The 25 Best SPIN Covers of All Time 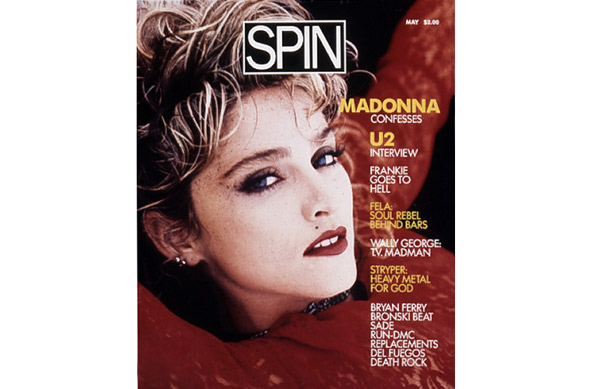 May 1985
In her typically brash style, Madonna told our writer: "I couldn't be a success without also being a sex symbol. I'm sexy. How can I avoid it? That's the essence of me. I would have to have a bag over my head and over my body; but then my voice would come across, and it's sexy."The singer graced the cover of our first issue, and again for the 1987 and 1989 anniversary issues. She appeared on the cover three more times, in January 1996, April 1998, and April 2000.

May 1985
In her typically brash style, Madonna told our writer: "I couldn't be a success without also being a sex symbol. I'm sexy. How can I avoid it? That's the essence of me. I would have to have a bag over my head and over my body; but then my voice would come across, and it's sexy."The singer graced the cover of our first issue, and again for the 1987 and 1989 anniversary issues. She appeared on the cover three more times, in January 1996, April 1998, and April 2000. 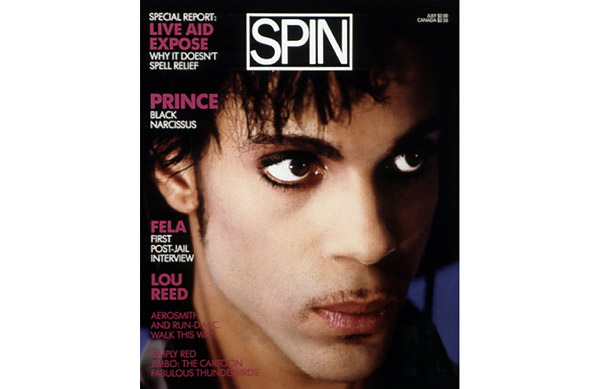 July 1986
Prince’s eighth album, Parade, was released in May. Timothy White wrote of it: “Prince is the single most sagacious figure in all of modern R&B, funk, and soul.…Not since [James] Brown has there been an artistic vision possessed of such a quirky, riveting mystique, the manchild turning out tracks one has to LEARN in order to fully hear.” 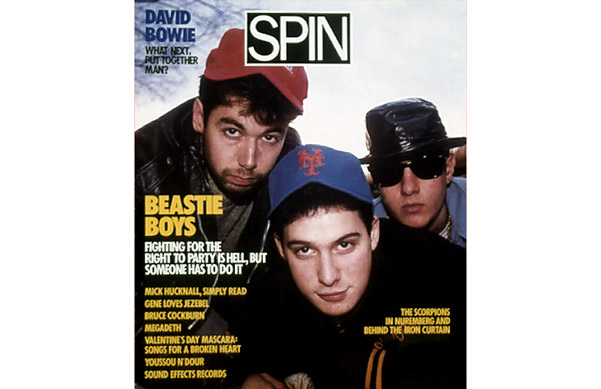 March 1987
In January 1987, the Beastie Boys became the first act to be censored on American Bandstand. Henry Rollins recounted the story in 1998: “They threw all their microphones up in the air, and they were breaking them and not even trying to lip-synch. Then one of them hands a broken cordless mic to Dick Clark and goes, ‘Here’s your mic…Dick.’” 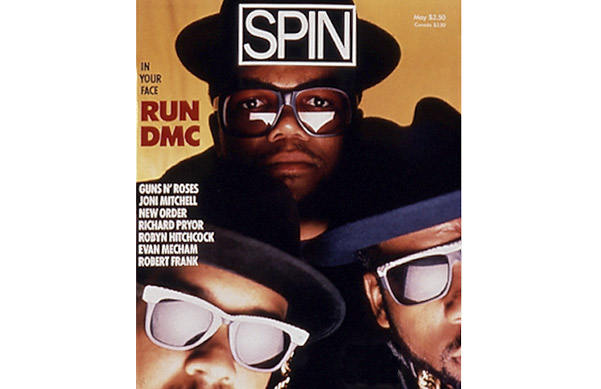 May 1988
Run-D.M.C.’s fourth album, Tougher Than Leather, was released in May and went platinum two months later. The trio starred in a movie of the same name released in the fall of that year, which also featured the Beastie Boys and was directed by Rick Rubin. 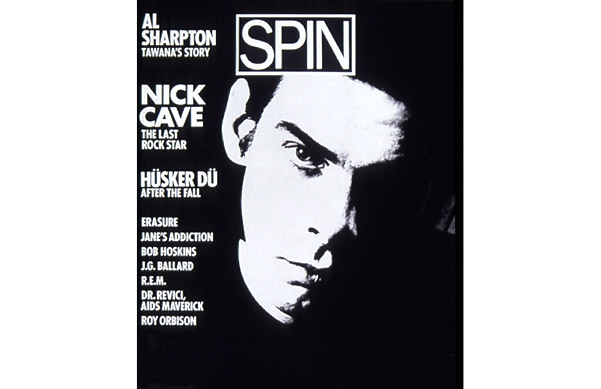 February 1989
This is the first of only three completely black-and-white covers in our history. The other two were Sinead O’Connor in November 1991 and Alice in Chains in March 1993. The aesthetic fits Cave's dark musical arrangements and lyrical explorations of religion and death. 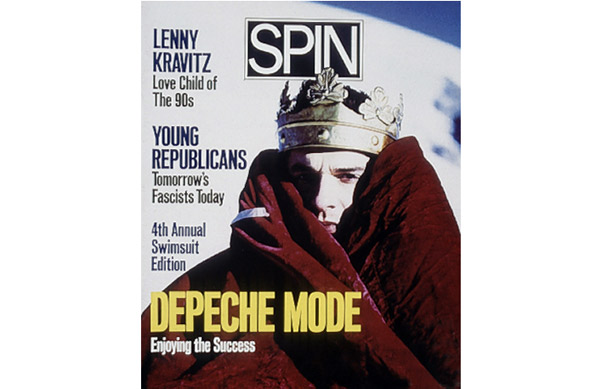 July 1990
Their reigning mode? Popularity. In March 1990, 20,000 fans showed up to a Depeche Mode autograph session in West Los Angeles. The mob soon turned riotous, and a few fans were hospitalized with minor injuries. 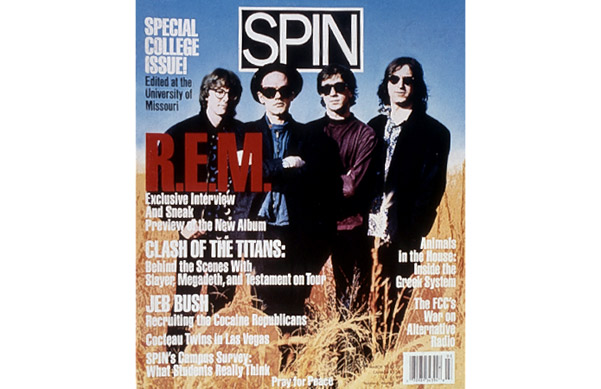 March1991
R.E.M.’s Out of Time, released this month, was their first album to top both the U.S. and U.K. charts. Did that mean the indie band were suddenly sell-outs?Michael Stipe told SPIN: “I remember when Gang of Four put out Hard, I was like, ‘Oh fuck, here we go!’ I listen to that record now and it's amazing. When something that’s considered secret and wonderful is revealed to the world, it becomes a little less wonderful. It’s time to find something new. That’s a legitimate, healthy cycle. But I think we’re still great." 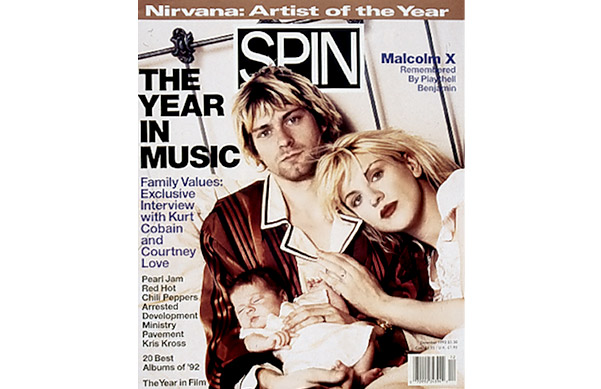 December 1992
Frances Bean Cobain was born in August 1992. Nirvana released Incesticide, a collection of rarities and B-sides, in December. 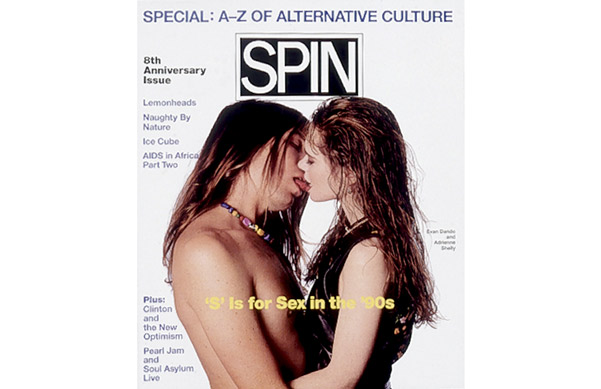 April 1993
SPIN Publisher Malcolm Campbell remembers receiving “complaints from both advertisers and Southern Baptists” about this provocative shot of the Lemonheads frontman and the late actress. 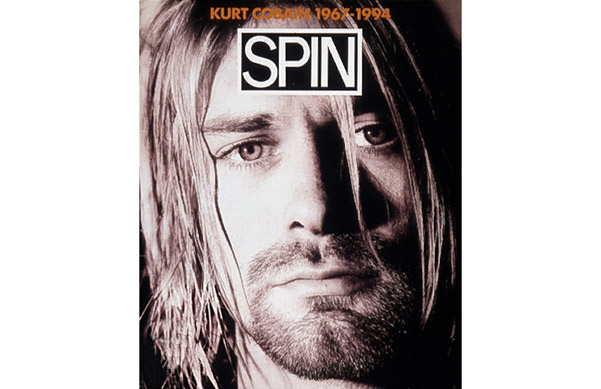 June 1994
Cobain was found dead in April 1994. Monthly magazine lead times being what they are, wife Courtney Love appeared on the May cover, for a story that had been prepared before Kurt’s death. 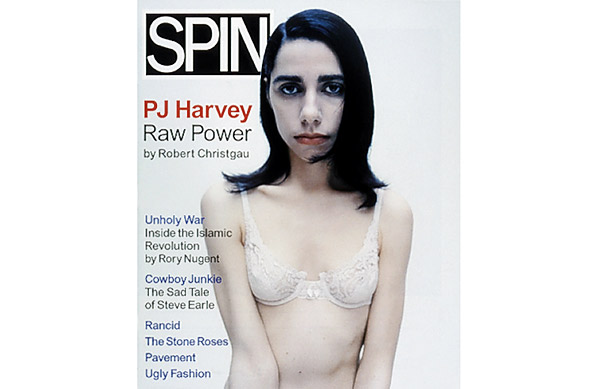 May 1995
In 2000, Harvey said that she had been experiencing a “major or minor breakdown” during the time this photo was taken, partially because she believed artists were supposed to be self-destructive. “I was seriously struggling to stay afloat,” she said. “I couldn’t function anymore.” 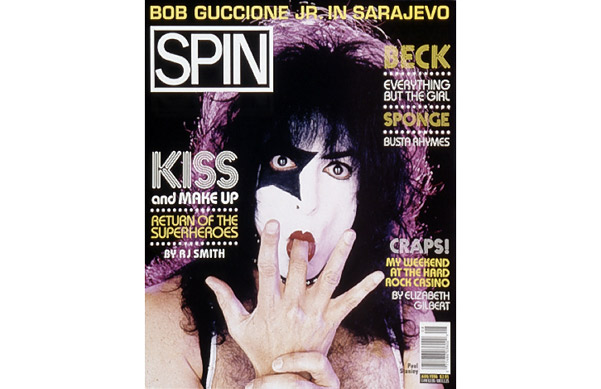 August 1996
Frontman Gene Simmons told SPIN: “I’ve never been high in my life, except in a dentist’s chair. Never been drunk. My room was a deal room in college! My roommate was a dealer, and I didn’t have a clue what was going on. I was too busy hunting puss. I get that.” This issue had four different covers, one for each band member. It ended up being one of our best-selling issues ever. 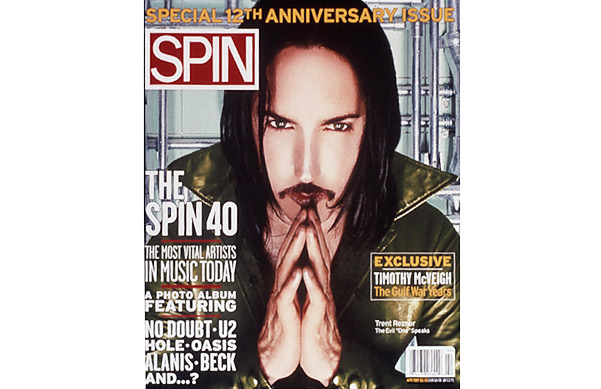 April 1997
While this cover was being shot, Reznor was dealing with a family crisis. “I took one picture of him trying to pull his face apart,” said photographer Andrea Giacobbe, “which is illustrative of the emotional state he was in during the shoot.” 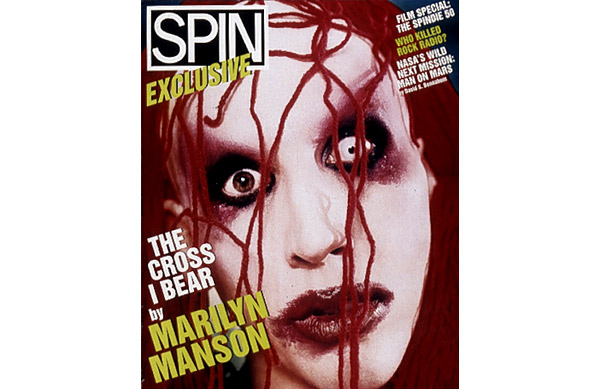 February 1998
Manson poked fun at this cover later that year in the music video for “The Dope Show.” In it, his face appears on the cover of SPUN magazine. 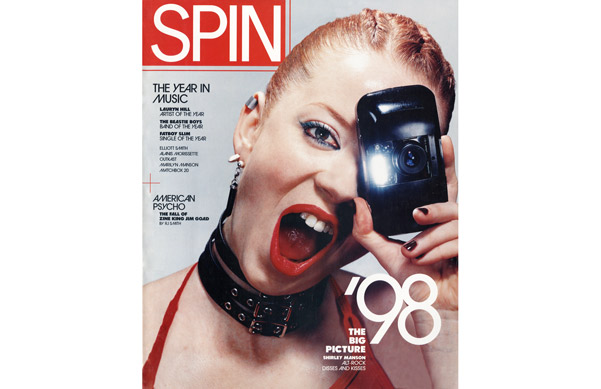 January 1999
Manson wasn't the first choice for the front cover of this “Year in Music” issue. But as other musicians either canceled or became unavailable, editors, facing a very tight deadline, elevated the Garbage frontwoman. This sassy shot was the pleasing result. 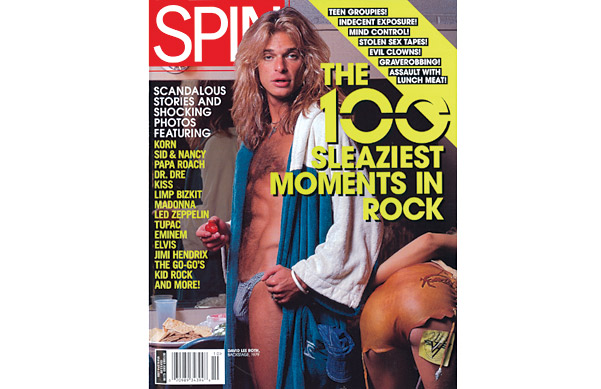 October 2000
Deputy editor Steve Kandell used to have a poster of this cover on his office wall before the magazine moved to a new, open-plan space last winter. “My biggest regret about no longer having an office is that I don't have Dave protecting me,” he says. 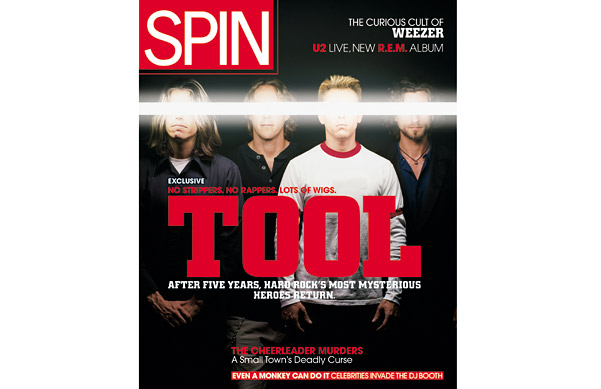 June 2001
Tool finally released their third studio album, Lateralus (the follow-up to 1996’s Aenima) in May 2001; it had been delayed by years of legal grappling with their label. The album debuted at No. 1 on the Billboard chart. 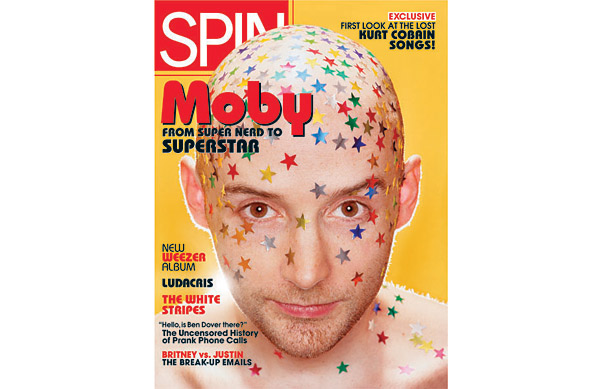 June 2002
“People think of Moby as a computer guy locked up in a studio, but he’s actually quite a pervert,” said photographer David LaChapelle following this cover shoot. “I mean that in the best possible way.” 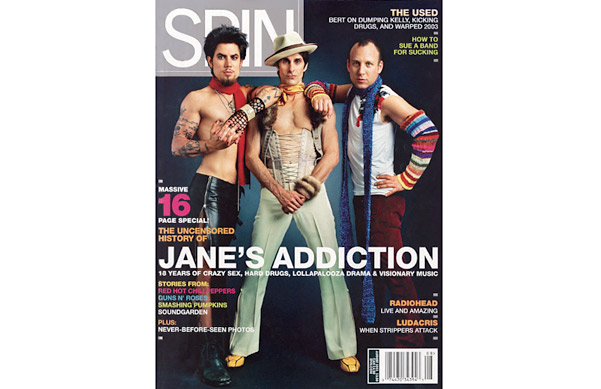 August 2003
Strays, Jane’s Addiction’s first album since their 1991 breakup, was released in July 2003. The following June they disbanded for a second time, only to re-form again (this time with original bassist Erik Avery) for performances in 2008 and 2009. 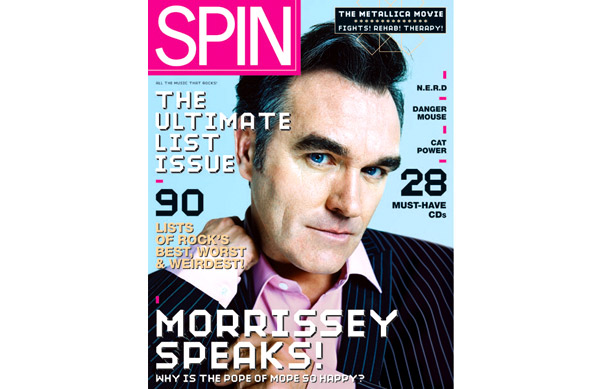 May 2004
This cover hit stands just before Morrissey’s seventh studio album, You Are the Quarry, was released on May 18. The then-45-year-old singer told SPIN, “I feel so much happier now.…With age, you can put things into perspective.” 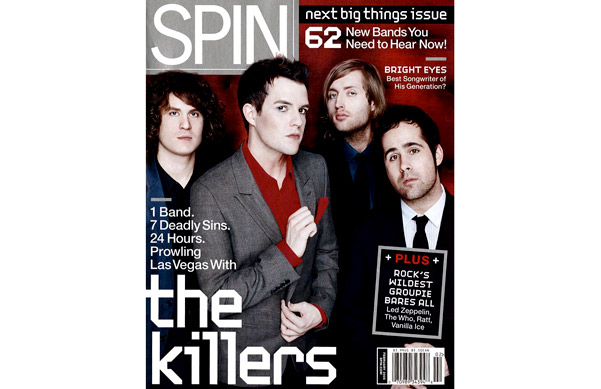 February 2005
At a time when much was made of his religion, lead singer Brandon Flowers told SPIN, “It’s okay to say, ‘I’m an atheist and I’m this artist.’ But it does make people kind of raise an eyebrow when they hear ‘Mormon,’ because I smoke and drink.” 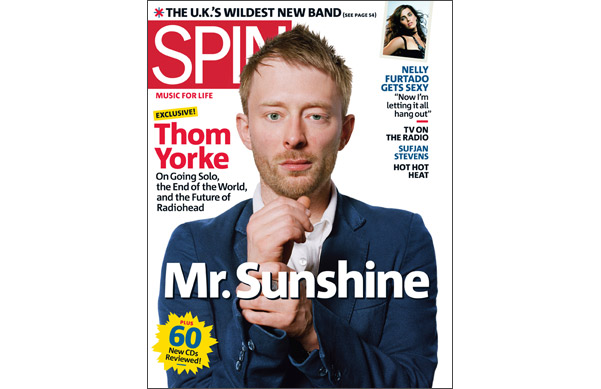 August 2006
Yorke’s solo debut, The Eraser, a collection of electronic recordings, was released in July. “I always wonder whether [Radiohead] should be carrying on,” Yorke told SPIN. “You can’t disappear for six months and come back and expect it to be wonderful. And by rights now, we should have split up. Isn’t that what we’re supposed to do at this point? We’re not fucking 20.” 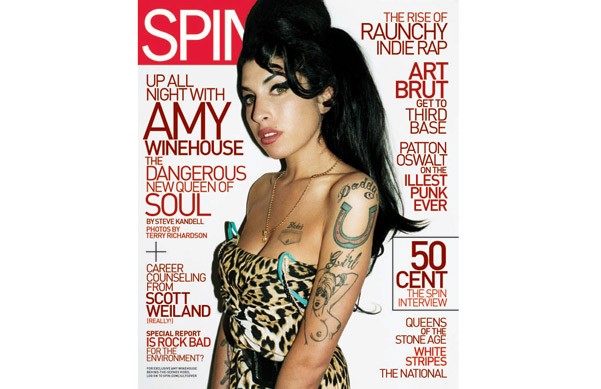 July 2007
“The story really was about how inseparable she was from her Blakey,” says Steve Kandell, who wrote the cover story. “That included dry-humping him on the floor of the studio while photographer Terry Richardson snapped away. At the time I thought that might be darkly romantic. Turns out she was just real fucked-up.” 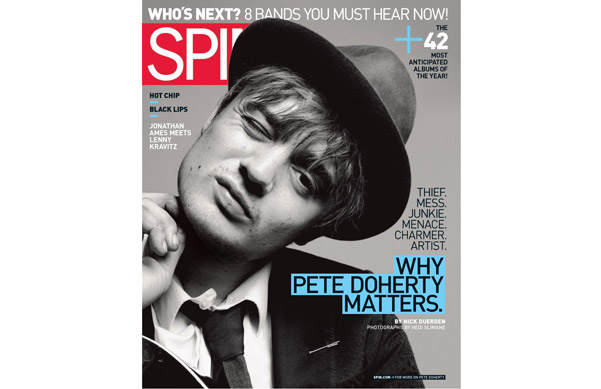 February 2008
The photo crew traveled to Doherty’s rented manor house in Wilshire, England, for this shoot. “The house had no furniture,” says photo director Michelle Egiziano. “There were beautiful paintings all over the walls and a room with a 15-foot ceiling and nothing but a record player.” 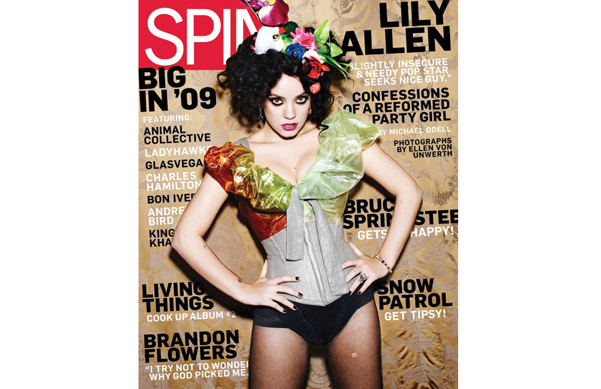 February 2009
We see London, we see France! “She’s wearing her own panties. They, as much as Vivienne Westwood’s corset, make the cover photo so iconic,” said stylist Karl Plewka of this shot.