"Die by the Drop" is the first single off Sea of Cowards, the second album from Jack White's supergroup. 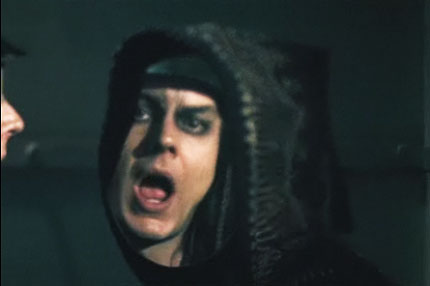 Jack White and Alison Mosshart are a rock force to be reckoned with. And they go no-holds-barred in the video for “Die by the Drop,” the first single off the Dead Weather’s upcoming second album Sea of Cowards, out in May. Watch the video here.

For the clip, the former SPIN cover stars — also featuring Dean Fertita (Queens of the Stone Age) and Jack Lawrence (the Raconteurs) — nabbed Floria Sigismondi, director of the The Runaways and the White Stripes’ 2005 video “Blue Orchid.”

The Italian Sigismondi clearly infused her signature dark and dramatic style into “Die by the Drop.” White and Mosshart saunter about looking like the epitome of gothic royalty — Mosshart complete with metallic makeup and long cape, and White in a top hat and with a cane made out of bones. The duo taunt the lyrics back and forth over a crushing guitar hook and pounding piano that doesn’t stray too far from the band’s 2009 debut Horehound. The spooky graveyard, hooded undertaker-esque characters, and superimposed images of White’s and Mosshart’s bodies over one another add to the eerie vibe.

The audio version of the new single and its B-side, “Old Mary,” also dropped online today. Stream both at Some Kind of Awesome.

The Dead Weather are prepping for a Spring tour (check out dates here) and shouldn’t be missed: Their first live show at the Bowery Ballroom in NYC was one of SPIN’s 30 Best Concerts of 2009.

Tell us what you think of “Die by the Drop” in the comment section below.