Plus: Watch a trailer of the Irish band's massive California gig, which streamed live via YouTube last October. 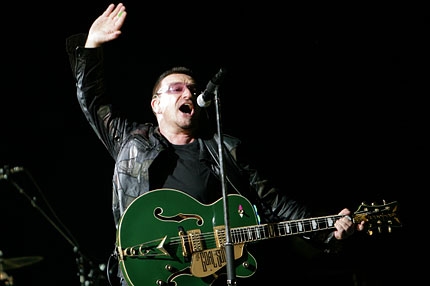 U2’s October 2009 stop for 97,000 fans at the Rose Bowl in Pasadena, California, streamed in HD to the entire world via YouTube, and now it’s being released on DVD and Blu-ray on June 3. Watch a trailer below!

Filmed by 27 cameras and directed by Tom Krueger, who helmed the band’s 3D concert movie that screened in theaters last year, the gig was U2’s largest ever in the U.S. and was viewed over 10 million times in one week on the Dublin rockers’ YouTube channel. (The Rose Bowl video is no longer available on the channel, but you can check out other U2 clips there.)

U2360° at the Rose Bowl will will also contain a tour documentary, Squaring the Circle: Creating U2360°. The June 3 DVD release date conveniently coincides with the kickoff of another leg of the 360 Tour: A string of 16 North American dates begins that night in Salt Lake City, Utah.

Check out our photo gallery of the 2009 tour’s U.S. opener in Chicago here, and read Kyle Ryan’s live review here.