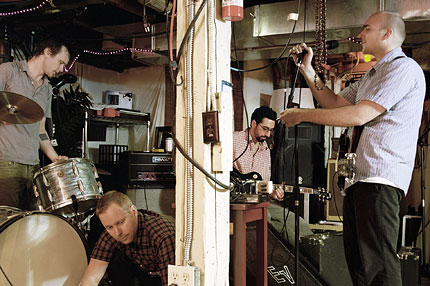 After a triumphant 21-date reunion tour in 2009, Seattle rockers Sunny Day Real Estate are heading back into the studio to record a new album with their original lineup, their first together since 1995’s LP2.

The news was tweeted by Seattle radio station KEXP DJ Marco Collins (although his tweet seems to have disappeared) and confirmed by Billboard, but no further details are presently available.

While touring last year, the band was performing one new song, billed appropriately on set lists as “New Song.” Its “guitars suggested someone has a minor thing for the beginning of the Who’s ‘Baba O’Riley,'” SPIN.com’s Mike Usinger wrote after hearing it performed on the tour’s opening night in Vancouver. “Enigk announced the number as a work in progress, but that didn’t stop Hoerner from grinning like he’d just won the Powerball lottery.”

Not surprisingly, questions about recording new SDRE material have dogged the band since their somewhat unexpected reunion was announced. “There is certainly interest but it’s hard to tell right now,” Enigk told SPIN.com in September 2009. “We’ve made it a goal to leave expectation at the door and take things as they come. We all have established commitments that would involve good balance between them.”

One of those commitments — probably the biggest one — is Mendel’s primary gig: playing bass for Foo Fighters. Dave Grohl said this week that his chart-topping rock band should resume activity this fall, starting work on a seventh album.