Plus: Find out why the band accepted offers to play festivals this summer, including Lollapalooza. 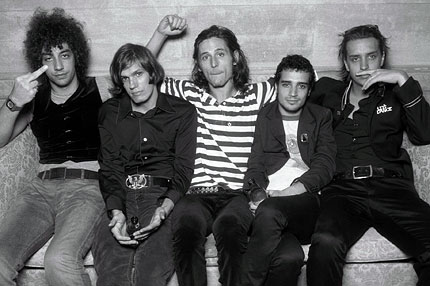 The Strokes are working on their fourth studio album, their first since 2006’s First Impressions of Earth, but singer Julian Casablancas is keeping his distance from his bandmates in the studio.

In an interview with ABC’s Dan Harris (which you can watch below), Casablancas admitted that the band was tracking songs without his input. Why? “I’m pretty opinionated,” the singer admitted. “I’m not pushy to the point where it’s my way or no way. I felt if I wasn’t in the room, and wasn’t saying that, they could spread their wings, if you will.”

Instead, Casablancas is adding lyrics and vocals later in the recording process for the album, which is expected in September. “It sounds more like the last record, but I might try to funk it up a little bit,” he said.

Casablancas also candidly revealed why the band accepted offers to play festivals this year, including Chicago’s Lollapalooza and a few international ones, too. “Should I say the truth?” he pondered. “Money. The offers were so crazy we had to say yes.”

Before the Strokes reemerge on stages this summer, Casablancas will continue to support his solid solo album, Phrazes for the Young, with solo dates this Spring and a stop at the Coachella festival in April.