The guitarist on his ambitious new release with Angels & Airwaves, saving the music biz, and drug addiction. 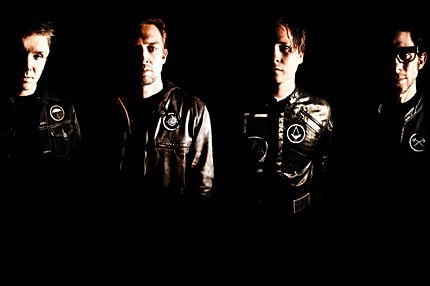 The music world knows him as the perennially teenaged guitarist and vocalist of reunited pop-punk trio Blink-182, also featuring his longtime pals Mark Hoppus and Travis Barker. But in his spare time, he’s spending more and more time in a place you wouldn’t expect a guy with an arsenal of dick jokes to go: the boardroom.

Recently, DeLonge, 34, has been using words like “user-experience” and “monetize” to present his new company Modlife, a website that helps musicians control and profit from their image and merchandise while releasing their music for free.

Hardly. And the latest release from DeLonge’s space-rock quartet Angels & Airwaves — a movie and album called LOVE — is Modlife’s key selling point. Modlife is helping the album (released for free on Valentine’s Day) recoup the $500,000 spent on its production, plus a portion of millions shelled out for LOVE the movie — a sci-fi epic to be released theatrically later this year. LOVE’s concept is also an uncharacteristic venture for DeLonge. Rather than the playful lyrics of Blink, DeLonge is going deep, exploring love, emotion, and human interaction and connection.

DeLonge dishes with SPIN.com about Modlife, LOVE’s concept, and Blink-182.

Hey, Tom. You’ve become quite the businessman recently. Did you envision this for your career?
No. But what started as a hobby has grown into a real business with real people and families and mortgages. With Modlife, I’m hoping to help bands. So I’m very fortunate.

It’s like you’re leading two different lives. Is it awkward cracking nasty jokes after having become a family and businessman?
No, because I’m still that guy. My friends and I still go out, have some drinks and crack dick jokes and try to offend people. But then we talk about larger world concepts. It’s indicative of my generation — you’re smarter than people give you credit for but at the same time you don’t care if people give you credit at all.

Angels & Airwaves released LOVE as a free download. How are you making any money?
[Laughs] You know, if a band on a label sold a few hundred thousand copies of their record these days they wouldn’t make any money. But if a band can pump out 10 million copies of a record for free, and 50,000 of those fans come to the band’s website to watch pay-per-view videos or buy a t-shirt, that’s roughly $10 million in revenue per year. Modlife combines all these new revenues streams and that’s what financed our new album and movie — and we were the first band to use it. It’s a whole new economic equation and we’re trying to solve this music industry crisis from the inside, not from the top where the executives are.

Is there anything you’d like to tell those top executives?
It’s funny, as soon as Universal found out about Modlife they flew me to New York and had me present the technology to Universal Worldwide via satellite. I didn’t know it at the time, but it was all because Universal thought Modlife meant the end of their business. They were actually doing intelligence work — they’re scared to death.

What’s the concept behind LOVE?
We loved the idea of esoteric symbolism. Geometric shapes hold an energy pattern and scientists did some experiments, which say certain geometric shapes can affect matter around them. It’s simply because when a human looks at a shape, they instantly receive energy from their brain. So we reworked the geometric shape of the word “Love” (see here), so when people see that word it instantly provides energy. That was the foundation of how we built the album and the movie.

Heavy. Have you always been interested in this?
I’ve have. I’m interested in a lot of different things, but first and foremost I’m into the idea of human consciousness, and Angels & Airwaves is a byproduct of that. It’s an exciting time for a band like us, because I think young adults are interested in waking up to the world around them.

You’ve said that with LOVE you wanted to send chills down listeners’ spines. What music still sends chills down yours?
I’m a huge stadium rock fan, but I’m also a fan of everything from Massive Attack to Peter Gabriel, U2, the Police, Radiohead, and Coldplay. I’ve realized that I love all forms of music and get excited when any artist goes crazy and creates something that is an experience. As I’ve matured as an artist, I’ve realized how hard people work to deliver something like that.

Tell me about LOVE the movie.
It evolved into something much grander than originally planned — it blew our minds. The movie is meant to be a sonic and visual experience. The narrative crosses time and space. It’s a story of hope, love, and the interconnectedness between people. There are real actors and incredible cinematography. We recruited Oliver Stone’s editors, Darren Aronofsky’s sound designers, and specialists who worked on computer-generated imagery on Star Wars and Lord of the Rings. But we’re not competing with Avatar. It’s an independent film and it took us four years to film because the director built a space station by hand. It’s an art film that’s meant to further the ambition and message of the band.

Was LOVE influenced by your favorite sci-fi movies?
Oh, yeah. We’re huge Stanley Kubrick fans. The director of LOVE [27-year-old Will Eubank] used to be a cinematographer and he aspired to shoot scenes the way Kubrick would. So, LOVE has that Kubrick tonality to it, but this is not a Stanley Kubrick movie — there will never be another. At the same time, LOVE has a modern feel. For example: In one scene, these astronauts go through a wormhole sequence and you feel like you’re being slapped around inside your head by a sonic boom. It’s meant to have a juxtaposition from classic sci-fi movie to something more modern you might see in theaters now.

What’s the plan with Blink-182?
We have a lot of ideas and a lot of exciting stuff, but I’m so deep into the Angels & Airwaves stuff. There’s no news I’m going to release without the other guys.

During the recording of the first A & A album you were addicted to narcotic painkillers. How does it feel to look back at that time after coming so far?
I was going through a big change in my life, coming from a band that was gigantic to starting all over again. It wasn’t an easy thing for me and I said stupid shit in the press and made myself look like a moron. The only thing I can say is that, well, I am a moron and I do say stupid shit. I don’t believe that I’m better than anybody, but I do believe that I’ll try harder than most and I hope that people just join me for a little bit of a ride.