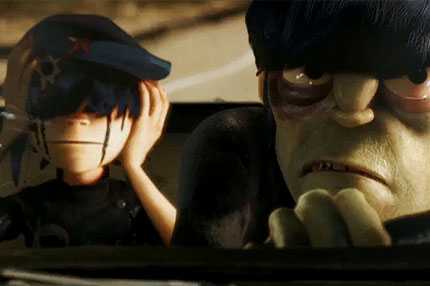 The animated alt-electro outfit Gorillaz have just released the video for their first single, “Stylo,” off their upcoming SPIN-approved third record, Plastic Beach, which hits stores on March 9. Check out the video here.

The clip, directed by Gorillaz co-creator Jamie Hewlett, has a post-apocalyptic feel, as Gorillaz characters Murdoc Niccals, Cyborg Noodles, and 2D end up in a high speed car chase through the desert — as badass bounty hunter Bruce Willis tries to take them down!

The track features guest lyrics from rapper Mos Def and R&B singer Bobby Womack, who each lend a soulful touch to the song’s hip-hop beats and understated disco synths.

You can listen to Plastic Beach in its entirety courtesy of NPR. In the meantime, check out the video and tell us what you think in the comments section.