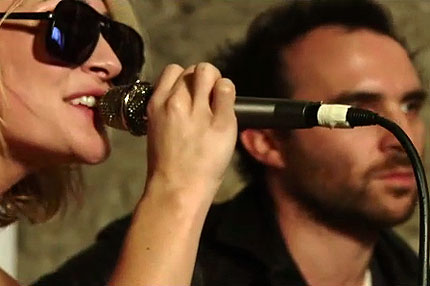 When you’re spending four days in Austin, Texas, seeing loads of ear-pounding rock’n’roll, it’s always a pleasure to turn down the volume and see some truly remarkable artists play in quieter, stripped-down settings. That’s what happened at the SPIN/MySpace Music Loft on 6th Street when Emily Haines and Jimmy Shaw from Metric stopped by to perform two songs for a lucky audience. Watch below!

Metric, who opened for Muse on Friday night at MySpace’s special event at Stubb’s BBQ and also popped up onstage with Broken Social Scene Thursday night, played two songs off 2009’s Fantasies: “Help, I’m Alive” and “Gimme Sympathy,” a song they world-premiered, also in an acoustic version, at SPIN’s Coachella house in 2008.

Check out the video here, and catch Metric on select tour dates this Spring in the U.S., Canada, and Europe.