The smooth SoCal singer-songwriter weakens knees in the Loft. 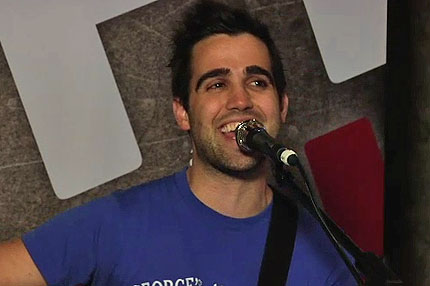 When you’re spending four days in Austin, Texas, seeing loads of ear-pounding rock’n’roll, it’s always a pleasure to turn down the volume and see some festival artists play in quieter, stripped-down settings. That’s what happened at the SPIN/MySpace Music Loft on 6th Street when SoCal smoothie Kelley James stopped by to play a few songs. Watch below!

James, who also co-MCed SPIN’s bash at Stubb’s, played a laid back, late afternoon jam session at the Loft, joined by bassist Mark Smidt of Shwayze and Joel Owen of Pawnshop Kings on percussion. Always down for improvisation, James personalized “Six Bottles” and “Wonderful Place” — both culled from his 2009 album, Break Free — with Austin-specific lyrics, and playfully engaged the crowd, particularly the ladies. And he’s got great experience working rooms packed with loads of women: He’s spent a big chunk of the past two years on a “Sorority Tour,” performing at Greek houses nationwide.

Check out the video below, and visit kelleyjames.com for full tour dates — James continues his Sorority Tour, along with loads of other performances, through May.