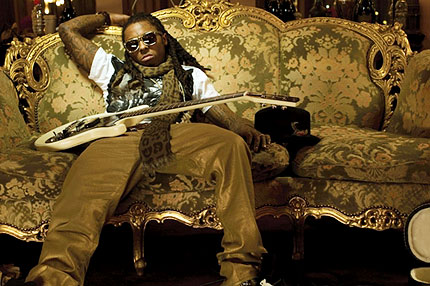 [UPDATE: Lil Wayne’s sentencing has been delayed yet again, this time by a fire at New York City’s Manhattan Criminal Courthouse on Tuesday morning. Get the full story here.]

Today a New York City judge will sentence New Orleans rapper Lil Wayne on a gun charge, and his prison sentence will begin immediately. He is expected to get a one-year jail term.

Weezy took to his Twitter account this morning to deliver a heartfelt message to his fans — and the 227,000 or so followers he’s wrangled since joining the social network last week: “They kant lok up my heart bekuz y’all already have it on lok. ……thank u.”

Lawyers for the 27-year-old MC negotiated a four-week postponement of his sentencing hearing so he could finish a series of dental surgeries — which resulted in a whopping eight root canals. Ouch!

He’ll be serving time for a weapons conviction stemming from a 2007 arrest after a gig in NYC.

The rapper has been trying to squeeze in as much work as possible before heading off to jail. He kicked off a short tour in New Orleans just before New Year’s Eve, dropped a verse on the revamped version of “We Are the World”, starred in one of hottest performances at February’s Grammy Awards, and crammed in some studio sessions in Miami.

Wayne also tried to sell some of his Miami properties this week, but is having trouble because one of the apartments “reeks of weed,” and potential buyers are worried Weezy’s old friends might “show up unannounced,” the Daily News reports.