Plus: See new photos from the pop star's "Telephone" video. 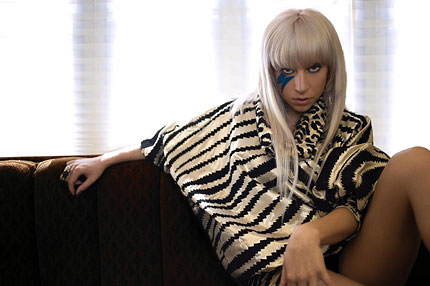 Strap on your pouffy wigs, grab your glowing scepters, and apply your glittery makeup, gamers — Lady Gaga is coming to Rock Band!

Rock Band creator Harmonix has just announced that a handful of Lady Gaga tunes will be released next week, GameSpy reports. “Bad Romance,” “Just Dance,” “Monster,” and “Poker Face” will all be available for download, as well as a version of “Poker Face” sung by South Park’s Eric Cartman. The new songs will be available March 16 for the XBox 360 and Wii; March 18 for the PS3.

Meanwhile, anticipation continues to build for Gaga’s “Telephone” video, which debuts Thursday night on E! News. Photos from the video show Gaga wrapped in crime scene tape (among other outfits) and Beyonce staring at a bright red telephone. Gaga performed the song at the BRIT awards last month, where she took away multiple awards, including Best International Breakthrough Act.

And that’s not all from the Gaga camp. MTV is reporting that the avant-garde star is in the early stages of planning an ambitious 3-D concert tour and DVD. Gaga is currently amidst her massive, worldwide Monster Ball tour, which hit Boston this past December. Read SPIN’s review of the show right here.