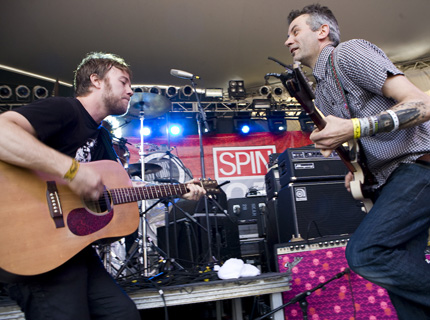 Rogue Wave brought a little left coast love to the SPIN stage atStubb’s in Austin this past Friday (March 19), performing songs from their justreleased fourth album, Permalight.SPIN.com’s Peter Gaston caught up withfrontman Zach Rogue and drummer Pat Spurgeon after their performance,to chat about the tour and the music scene in their hometown –Oakland, California.

Rogue Wave has just wrapped up the first leg of their tour supporting Permalight.Theband will begin touring again in April, and have enlisted hometownfriends Man Miracle to open for them.Cited by Zach and Pat as “agreat young band from Oakland,” Man Miracle will be playing all WestCoast dates with Rogue Wave.