How She Became… Little Boots

The UK electro-pop star shares the story behind her name. 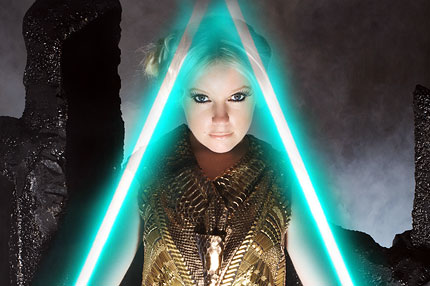 Why Little Boots: “It’s a nickname from my best friend,” says Little Boots (the stage name of Victoria Hesketh). “She called me that because I’ve got very small feet. I think she came up with it about two years ago when we were still studying at the University of Leeds. But it’s also a reference to the Roman emperor Caligula, whose name means Little Boots. Mostly though, we just thought the name was funny and it stuck.”

Previously Rejected Names: “The only other band name I used was for my old band Dead Disco. I didn’t have any other names.”

Best Band Names Ever: “Gary Numan had a great name. He seemed so futuristic, so Numan — New Man — it worked for him really well.”

Worst Band Name Ever: “I never like bands that have swear words in their name. I’m not a prude or anything, but I just don’t like it. Bands with names like Shitting Fists or what ever. No thank you.”