Check out this playful romp from the Canadian trio whose second full length arrives this June. 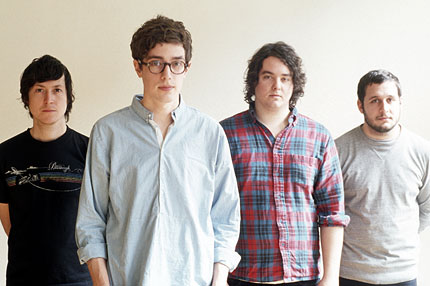 Say It, the second full-length from Toronto trio Born Ruffians, comes out June 1, and while it’s still chilly in many parts of the continent right now, the album’s first single, “What to Say,” is a welcome flash forward to summertime — listen to an exclusive stream below.

With a twinkling guitar riff from frontman Luke Lalonde and a lazy “Dock of the Bay” bassline from Mitch DeRosier, “What to Say” is an afternoon delight that laments the difficulties of communicating, especially when alcohol’s involved.

“‘What to Say’ is about how much and how little sense we make when we speak,” Lalonde tells SPIN.com. “It’s about the multitude of wrong words and the never-ending search for the right ones. May you choose wisely.”

Are the Ruffians making wise choices on this new song? Tell us what you think in the comments section below.

LISTEN: Born Ruffians, “What To Say”