Serj Tankian’s operatic vocals are one of the signature elements that helped Los Angeles-based metal band System of a Down stand out from their peers — and top the charts. So when Tankian joined the Auckland Philharmonic Orchestra to record a live CD/DVD, the results were unsurprisingly spectacular. Watch an exclusive video clip of “Sky Is Over” below! It’s a sneak peek of Elect the Dead Symphony, which his stores March 9.

After being approached by the New Zealand-based orchestra to collaborate, the 42-year-old Tankian — who maintains a residence on New Zealand’s west coast — set about re-arranging songs from his 2007 solo album, Elect the Dead, for a 70-piece orchestra. “For the performance, I began the process of almost rearranging the songs entirely by stripping them back down to piano and vocals and building them back up with cello, viola, two violins, a horn and then worked with an orchestrator to flesh that out for a 70-person orchestra,” Tankian tells SPIN.com.

While other songs took more time to reconfigure for the orchestral performance, which was filmed last year in Auckland, the reworked version of “Sky Is Over” hit the mark quite quickly. “That one came out great from the first time, they sight read that song perfectly,” he says. “Nothing had to be touched. It’s almost like they got that song from day one more than any other song.”

WATCH: Serj Tankian, “Sky Is Over” 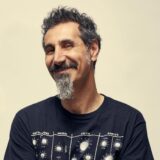 Bringing Elect the Dead Symphony to life energized Tankian, who’s channeled what he learned from the experience into a multitude of projects, namely his next solo album, which he hopes to release late-summer 2010. “I caught the orchestral bug since working on the DVD, and I’ve been bringing that to future projects,” he reveals, adding that he hopes to hire a local string section in each region to bolster his live show.

His philharmonic work is also fueling a stage adaptation of the Greek tragedy Prometheus Bound that Tankian’s conceiving with Tony Award-winning Spring Awakening playwright Steven Sater, set for a March 2011 premiere at Boston’s American Reparatory Theater. “There’s about 80-85 minutes of music already penned to it, all with really interesting textures from jazz to electronic to orchestral,” he says. “Steven will send me some lyrics based on a song that he has in mind and based on a part and character, discuss those with me, and then I’ll come up with music for it, demo the vocals, and he’ll give me his feedback.”

And for those Serj/System of a Down fans worried that all of these violas and cellos are making Tankian soft, fear not: “Although my second solo record is not solely orchestral, its orchestral jazz rock. I like to call it a musical clusterfuck.”

As for the future of System of a Down, who last toured in 2006 behind their 2005 double album, Mesmerize/Hypnotize, Tankian remains mum. “We always get offers to do stuff and there’s always rumors abound, which are quite enjoyable to experience,” he says. “If and when the time comes where we get together and play onstage, everyone will know. Until then, we’re doing our own things.”