Bird and the Bee Perform Hall and Oates Tribute 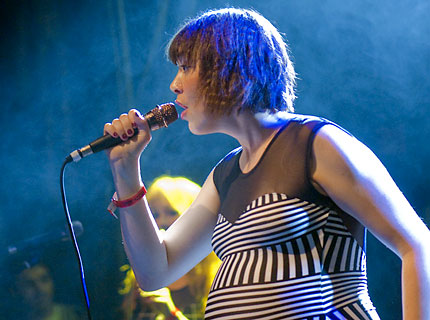 The crowd had to have seen it coming. The first sign appeared the moment the curtain opened. There was the Bird and the Bee in expanded octet form with a veritable arsenal of instruments and voices at its disposal. And yet, just left of center stage stood the night’s indisputable question mark: a conspicuously unattended microphone, just begging for a special guest.

Add to this the occasion for the sold out show at Los Angeles’ El Rey Theatre on Friday night – the pending release of the duo’s Interpreting the Masters, Vol. 1: A Tribute to Daryl Hall and John Oates – and, well, there was really only one of two ways the night could have gone.

For those paying attention, the answer came about halfway into the Bird and Bee original “Man,” as Inara George conducted her four-girl choir and Greg Kurstin lorded over his stack of keys and knobs. A small figure with a curly mess of dark hair appeared in the wings and, a song later – while erstwhile Beck bassist Justin Meldal-Johnsen plucked out the moody pulse for “My Love” – had a guitar lowered onto his shoulders by an eager stagehand.

Those details seemed lost on the audience, and with good reason. Not only was the Bird and the Bee at the top of its game, lithely hopping back and forth between its own jazz-pop tunes and Hall and Oates’ most ubiquitous yacht-rock anthems, but George was visibly very pregnant, and in good humor. Between songs she’d catch her breath and field questions from the crowd: “When are you due?” April 30. “Boy or girl?” A surprise. “Who’s the daddy?” Very funny.

But even with the baby on board, George bopped, vogued, grooved and moved through a soulful rendition of “Rich Girl,” a bubbly take on “Private Eyes” (which found one of the backup singers donning a bona fide Casio keytar), and a careening recreation of her and Kurstin’s “Again and Again” – each of which was greeted with screams, then sing-alongs. Early on, she dedicated the evening’s performance to Tom “T-Bone” Wolk, Hall and Oates’ longtime bassist who died from a heart attack only six days prior, and when the time came to finally pull back the figurative curtain, she did so with a wide grin.

“We have a very special guest here tonight,” said George, allowing the words to hang on the air for a moment. “He’s the Oates of Hall and Oates!” As the legendary songwriter took the stage, he had one request: “I really need a dose of feel-good tonight. So let’s do it.”

Song-derived pleasure (guilty or otherwise) doesn’t come much better than that compact man’s towering oeuvre, and as George and Oates duetted across “She’s Gone,” “Maneater” and, for the encore, “I Can’t Go For That (No Can Do),” it’s safe to say that whatever bad vibes had managed to stick around through the playful set exited the room post-haste.

The only bummer? Oates seemed microphone-shy, following George’s lead and, with a growled-out exception or two, keeping his voice subjugated beneath her mock-husky Daryl Hall approximation.But Oates made up for it by letting his guitar do the talking – it said things like “wakka wakka,” and moaned like a cat in heat – and the night’s best moment came when he and Kurstin traded solos before saying goodnight. They didn’t see it coming, and they weren’t ready for it to end either.

Chris Martins
Tags: bird and the bee, We Were There