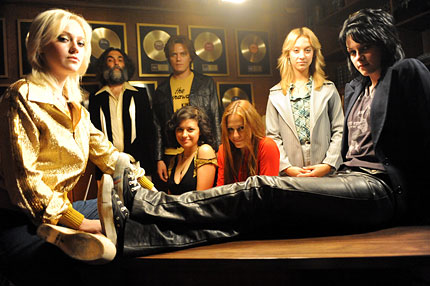 Kristen Stewart has the brooding look down pat, and Dakota Fanning has the feathered hairdo, but these Hollywood it-girls can sing, too. In the new trailer for The Runaways — check it out below — KStew, playing Joan Jett, and Fanning, portaying Cherie Currie, rock out onstage on the Runaways 1976 hit, “Cherry Bomb.”

The film, due in theaters March 19, depicts the L.A. girl group’s rise to fame and eventual fall into drink and drugs. Stewart and Fanning’s real vocals are used in the performance sequences. “Dakota watched my [1980] movie Foxes,” Currie recently told SPIN’s Phoebe Reilly. “She sounds just like me.”

For her part, Fanning relished being a rocker: “Man, when I walked on that stage I was a completely different person,” she told SPIN. “I could have done that scene all day, every day.”

Fanning and Stewart got a first-hand look at Jett’s rock’n’roll stagecraft during a special SPIN party at January’s Sundance festival, where the film first screened. Jett performed the Runaways’ “You Drive Me Wild” and solo hits “Bad Reputation” and “I Love Rock ‘n’ Roll,” while her band’s on screen doppelgangers watched from the audience. Check out exclusive pics here!

Watch the trailer and tell us what you think of Stewart and Fanning’s rock star impersonations in the comments.