No, Taylor Swift isn't in it -- but "Cold Winter" features another young beauty in peril. 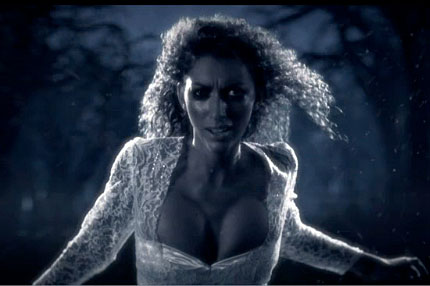 Following all of Kanye West’s blog rants and award-snatching, it’s easy to forget that the tabloid fixture actually makes music. The new video for “Coldest Winter,” off the 2008 album 808s & Heartbreak, delivers haunting imagery over an esoteric beat, and reminds us of some of the rapper’s better qualities.

The video, directed by Nabil Elderkin, who also handled West’s clips for “Paranoid” and “Welcome to Heartbreak,” features a remixed version of the track, adding tribal drums and scratchy synths to the more stripped down album version. The clip is all ominous imagery as a beautiful woman (complete with ripped-up bodice) runs through a dark forest, while grim-reaper-like figures beckon her.

“Coldest Winter” is said to be about the death of West’s mother, who passed away in 2007 after complications from cosmetic surgery.

Let us know what you think about the new song version and Kanye’s dark side in the comment section below.