WATCH: Hot Chip Jam with the Roots on ‘Fallon’

Plus: The U.K. electro group will play a free show in NYC tonight -- with an online webcast! Click for details. 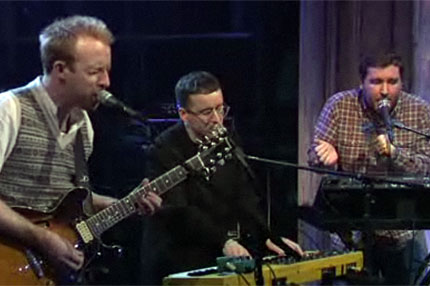 Electro-pop favorites Hot Chip and hip-hop maestros the Roots teamed up during Thursday night’s episode of Late Night with Jimmy Fallon to perform two songs off Hot Chip’s latest effort, One Life Stand (out February 9): the title track and “Take It In.”

Watch video of the latter cut below — it’s a web exclusive that didn’t make the live broadcast.

The band’s performing again tonight, this time at a free MySpace Secret Show at Highline Ballroom in New York City. Tickets are being distributed on a first-come, first-served basis, and doors open at 7 P.M. Philadelphia-based rockers Free Energy — one of SPIN’s 10 Artists to Watch in 2010 — will open.

Until then, watch Hot Chip with the Roots from Fallon: