WATCH: Coldplay Guest on ‘The Simpsons’

When Homer wins the lottery, he books Chris Martin & co. for a private arena show! See the full episode. 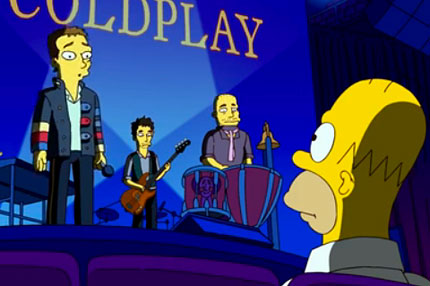 While the Grammys were in full swing on CBS, one of the world’s biggest bands — Coldplay — made a short, unheralded, and pretty cool guest appearance on FOX’s The Simpsons. Watch the episode below!

Last night’s story finds Homer winning the lottery — but he’s forced to spend his loot in secret because he ditched attending a wedding with Marge while buying the winning ticket. After a few other misguided choices — “What should I buy first? Hitler’s baseball? A mirror that gives me advice?” — Homer secretly starts purchasing things for his loved ones.

But when Bart discovers Homer’s secret stash of dough, he convinces his dad to do something fun for himself. So, Homer treats himself (and his boy) to a private arena show by Coldplay.

The Coldplay appearance starts at the 14:10 mark in last night’s Simpsons, which you can watch below. There’s also some footage of Martin recording his lines for the episode — including some funnier exchanges that didn’t make the final cut — over at coldplay.com.