RZA, the Game also contribute to the as-yet-untitled release. 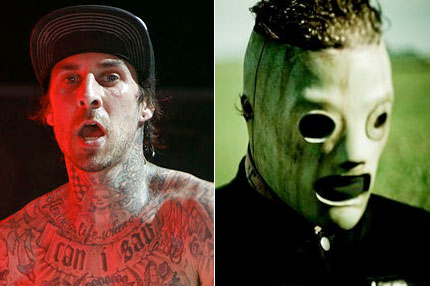 Blink-182 drummer/producer Travis Barker has announced that Slipknot vocalist Corey Taylor will join him for a metal-infused track on his first upcoming solo album. Hip-hop stars Lil Wayne, RZA, the Game, Rick Ross, and Beanie Segal are also slated to appear on the as-yet-untitled LP.

“I just love music, so with my album it’s no one genre,” Barker told Spinner. “It goes from everything from punk rock to hip-hop to some electro stuff on there to a metal song with Corey Taylor from Slipknot. It’s been really fun and interesting up ’till now.”

It’s not the first time the rocker has gained attention for genre-swapping collaborations: Barker took the stage with Eminem, Lil Wayne, and Drake at this year’s Grammys, and, later that week, Barker found time to join R&B songstress Mary J. Blige in the studio to record a cover of Led Zeppelin’s mega-hit “Stairway to Heaven.”

His project with club DJ and best friend Adam “DJ AM” Goldstein (dubbed TRV$DJAM) was put on hold after two mix tapes, and was later derailed by the duo’s serious plane crash in 2008 — which killed four and left both musicians hospitalized with third degree burns — and then again by AM’s untimely death following a drug overdose last summer.

In addition to the solo record, Barker has been plenty busy. The drummer wrapped up a three-month Blink-182 reunion tour this past October, and is about to begin recording a new Blink album: “We’re about to start working on it,” he told MTV earlier this month. “We go to Europe in August for all the festivals … we do, like, six weeks out there, and then our album will come out probably early next year.”