In the Studio: The Twilight Singers’ Greg Dulli

Greg Dulli is a happy man these days.

Even the guy known for crafting some of the darkest, fuck-the-universe rock’n’roll of the past 20 years (with the Afghan Whigs, the Twilight Singers, and the Gutter Twins) can’t resist the infectious euphoria of his adopted hometown of New Orleans, where the Saints Super Bowl triumph is still reason to celebrate — and Mardi Gras is in full swing.

“It’s the happiest place on Earth, with all apologies to Disney World,” Dulli, 44, tells SPIN.com. “It’s kind of joy incarnate. I’ve really never seen or been around such mass happiness in all my life.”

And something similarly sunny has crept into the music he’s writing in the Big Easy for the fourth album of original Twilight Singers material (and first since 2006’s Powder Burns). It could be his joyous surroundings, or the afterglow of his longest break from recording and touring in over a decade, during which he leisurely traveled the globe. 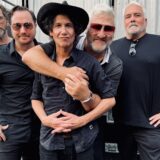 While his maudlin side remains intact — Dulli owns the New Orleans pub R Bar, which displays tortured voodoo dolls of the Saints’ opposing football teams — the ’70s AM-radio vibe of the new record, expected sometime this Fall on Sub Pop, should be a sharp detour from his last effort, 2008’s spooky Gutter Twins collabo with ex-Screaming Tree Mark Lanegan.

Dulli tells SPIN.com about the Twilight Singers project, what special guests will be showing up on the final album, and what it would take to reunite the Afghan Whigs.

How far along are you with the record?
I have a deadline of April 1, but my pride wants me to come in a little bit earlier, so hopefully I’ll be coming up to NYC sometime around the end of March to master it and get ready to go.

How many songs deep into it are you now?
I’ve recorded 20-22 songs but I’m chopping down. A lot of the records I liked when I was young were in the 35-38 minute range. I’m trying to keep it under 40 minutes, so I’m guessing I’m going to have nine to ten songs that come out on the finished record.

Who do you have in the studio working with you?
It’s really the first band record I’ve made since the Whigs, using the band I’ve been playing with since Powder Burns: Dave Rosser on guitar, Scott Ford on bass, Cully Symington is the drummer. There’s a couple other drummers: Gene Trautmann, who used to play in Queens of the Stone Age and Eagles of Death Metal, and Greg Lazorik, who is playing drums with Norah Jones right now. There’s a duet with Ani DiFranco. Petra Haden is on three songs and she sings a duet with me. I’m gonna record Lisa Kekaula from the Bellrays when I get back to California. So those are the guests. But most of the singing guests are all women this time. [Mark] Lanegan does sing on songs too though.

What does it sound like so far? Any specific influences?
Seventies AM radio is the operative phase here and there is a heretofore previously unrevealed sense of optimism on this record. It’s strange. I’ve played it for some of my friends and they’re like “Wow, you sound happy.” I’m like, “I think I might be.”

How so?
I did a bunch of traveling on my own, mostly in South America last year and South America is a very positive place, especially Argentina where I spent most of my time — Uruguay and Mexico. I put out a lot of records in a row in the last six years and I did a lot of touring. I love to travel, but I don’t think I got to travel and just look around — I always had to be somewhere or be at a sound check or something. If you ask me how I am right now, I would tell you that I’m doing very well.

The Gutter Twins record was certainly a darker one, so this sounds like it’s the inverse of that.
Yeah, Lanegan himself was one of the people who said I sounded happy and he would know better than anyone as he’s one of my closest friends. It’s me, but its 70s AM radio, that’s what I’ll keep going back to. A couple songs are under three minutes long — you get a blast and then its over, rather than in the past, where I’ve had a tendency to lumber on into the five-minute range.

How did you end up working with Ani DiFranco and Petra Haden?
I’ve recorded with them before, Petra played on Blackberry Belle and she plays on the Gutter Twins record too. Ani sang a couple songs on Powder Burns, too. She is married to my friend Mike Napolitano, who I’ve been working with [in the studio] for the last six or seven years. Ani heard a song when I wasn’t even around, and she just sang the whole song. When I came in and listened to it, I couldn’t imagine her not being on it. She’s a great singer and we actually do sing very well together. I’ve known Petra since she was a teenager; she’s an amazing violin player and absolutely one of my favorite singers of all time. Lisa Kekaula, we sang with the MC5 a couple years ago and talked about working together but never did. We’re going to do it finally when I get back to L.A. I’m a huge fan of hers and I’m looking forward to how that shakes out.

We’d be remiss if we didn’t ask: Any Afghan Whigs news?
If you know a sheik or a sultan who wants us to play a party, I’ll play that party. But we’d have to find Rick. No one knows where Rick is. You’ll have to put out an all points bulletin for Rick McCollum.

When’s the last time anyone’s heard from him? Recording tracks for the Whigs’ greatest hits collection?
Couple years ago. In Memphis, two or three years ago. I’m sure he’s fine. It’s vintage Rick, but that’s the guy you’ll have to call and ask.

Well, until an oil magnate calls, we’ll be awaiting the new Twilight Singers tunes.
I’m as excited as I’ve ever been about a record. The criteria for this record is that every song has to be played live, and I haven’t done that, maybe ever. I’m making sure every one of these songs will be played live at some time or another and maybe that’s why I’m pushing the brevity. When we tour — I’ve been playing with this band now for like five years and that’s a comfort level I haven’t had since the end of the Whigs. It’s a hot fucking band, that’s for sure.