The Brit songbird flaunts her new girl-group-inspired sound with "Do Wah Do" from her April album. 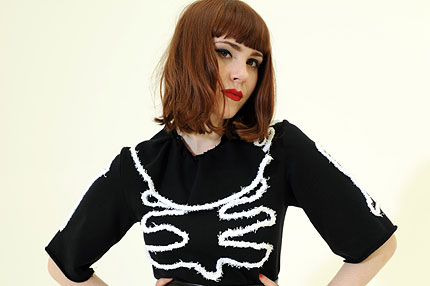 Chart-topping Brit singer Kate Nash will return with a new sound on her yet-to-be-titled second album, due stateside on April 20. And nowhere is that transformation more evident than on the album’s lead single, “Do Wah Doo.” SPIN.com has an exclusive stream of the catchy, girl-group-inspired track:

LISTEN: Kate Nash, “Do Wah Do”

“The song’s about one of my best friends from when I was younger,” Nash tells SPIN.com. “He totally betrayed me by hanging out with these enemies of mine — these perfect girls, who wore lip-gloss and talked about boys and were really annoying. He and I had grown up climbing trees, playing in the woods, and going on holiday together, so I thought he’d be cooler than that. But when he turned 15 years old he wanted a girlfriend. I was like, ‘Well fine, I’ll just pretend I don’t give a shit even though I’ll never ever forgive you, even when I’m 22 years old and writing a song about it.'”

Tell us what you think of the song in the comment section!

Here’s What Musicians are Saying About ‘Brexit’ on Twitter