The producer stops a recording session, brandishes an axe, and goes on a murderous rampage! 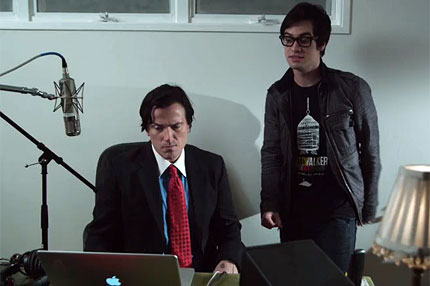 Solo artist Butch Walker is also an esteemed songwriter/producer behind hits from Fall Out Boy, Weezer, Pete Yorn, and others. He recently backed Taylor Swift at the Grammys. But there’s something about the 40-year-old Georgia native you might not know: He’s a well-dressed murdered who chops up dead bodies, a little like American Psycho’s Patrick Bateman — but with a taste for rock’n’roll, not “Sussudio” by Phil Collins.

In a hilarious new video posted to Walker’s blog, Panic! at the Disco singer Brendon Uri plays the real-life super fan who purchased a $25,000 pre-order of Walker’s new album, I Liked It Better When You Had No Heart, which includeed a grand prize of recording and spending a day with the rocker.

But when Urie arrives at Walker’s house, things get, well, bloody. Fed up with a lame dance song that Urie is recording, Walker — hair slicked back and dressed in an ’80s-style power suit — covers his floor with polyurethane, grabs an axe, and gets to work chasing Urie, who, in his attempt to escape, finds a house filled with dead bodies!

Does Urie have a career in acting? Tell us what you think in the comment section.