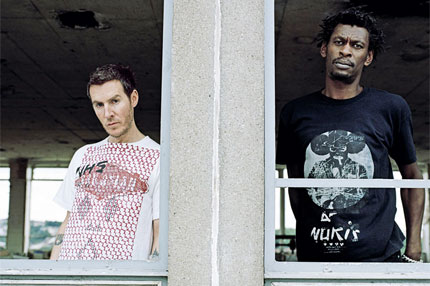 In support of their SPIN-praised new album, Heligoland, British trip-hop duo Massive Attack are heading stateside for their first North American tour in four years. The nine-date trek will kick off May 7 in Toronto and close with an appearance at Washington State’s Sasquatch! Festival on May 30.

Massive Attack — the core duo of Grant “Daddy G” Marshall and Robert “3-D” Del Naja — boasts some noteworthy collaborations on their new record, including tracks with Blur/Gorillaz mastermind Damon Albarn and TV on the Radio singer Tunde Adebimpe. “Half these people are mates who we’ve met over the years.” Marshall recently told SPIN. “Damon is a friend of the family, you know?”

Marshall also told SPIN that Heligoland collaborators Guy Garvey (of Elbow) and singer Martina Topley-Bird may join Massive Attack on some dates, as will their frequent collaborator and reggae legend Horace Andy.