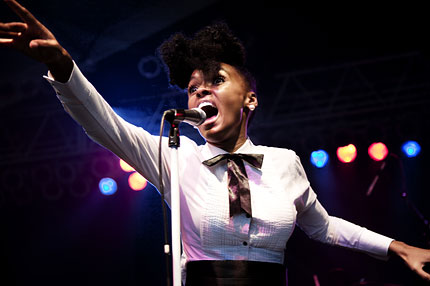 The wild, freaky soul of James Brown has been resurrected in Janelle Monae.

Atlanta’s pompadour-sporting, futuristic funk diva — who had a banner 2009, wowing SPIN at festivals like Bonnaroo and SXSW with her out-there R&B sound and plastic-doll looks — just released “Tightrope,” the first track from her new album featuring Big Boi… and damn is it catchy, fun, and really, really funky.

“Tightrope” is a funk groove on overdrive, with layers of snappy drums, fast-forward R&B bass and horn blasts, and Monae’s rapid-fire rap-singing. And it’s a lil’ wacky, too: Monae riffs on alligators and dancing, walking, and running on a tight rope, and Boi, a.k.a. Sir Luscious Left Foot, drops a quick rhyme about cabbage, the Dow Jones and NASDAQ, and matchbooks.

The track caps with some backup vocalists cooing seductive chants of “happy birthday”, and an instruction from Monae: “Ladies and gentlemen, the funky is on section mmmmmmmetropolis!”

Hear “Tightrope” and another similarly funk-tastic song called “Cold War,” over at Monae’s website. Both tracks are off her debut full-length, The ArchAndroid, out May 18.