How They Became… Yeasayer

Singer Chris Keating of Yeasayer shares the story behind his band's name. 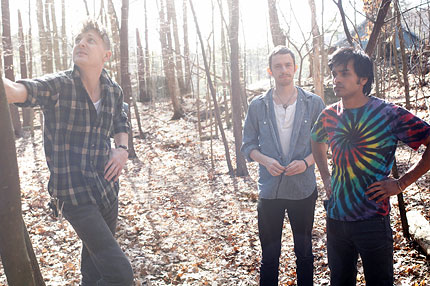 Welcome to the new weekly SPIN.com feature “Name That Band!” in which we get the inside stories behind the mysterious monikers of some of our favorite artists. (See past episodes of Name That Band! here.)

Why Yeasayer: “My friend Grady is sort of anal retentive,” explains keyboardist-singer Chris Keating. “He used to carry around this book of names — a black book with thousands of band names that he’d scrawled in there. We totally jacked the name from his book. We thought there was something nicely sinister about Yeasayer — almost like a cultish sense of positivity. I didn’t anticipate the amount of ‘Clap Your Hands Say Yea’ headlines that we’d generate. I’m gonna shoot the next person that prints that. But at least we’re the only thing that comes up if you Google ‘Yeasayer.’ And Grady has something he can put on his tombstone: Provided Yeasayer with their name.”

Previously Rejected Names: “When we started out in 2006, there were a lot of bands with ‘Wolf’ and ‘Black’ in their name, so at one point we wanted to go with something like Jet Black Wolf Hound.”

Best Band Names Ever: “Joy Division is clever, given that the name is taken from Nazi terminology!!! Seemed cool at the time.”

Worst Band Name Ever: “The Beatles is a terrible band name. That’s the name of the best band ever? A bad pun? R.E.M. is terrible, too. But they both seemed to get over their name shortcomings.”

Next Week: The Flaming Lips