How They Became… Hot Chip

Joe Goddard of the Brit dance-poppers shares the story behind the band's name. 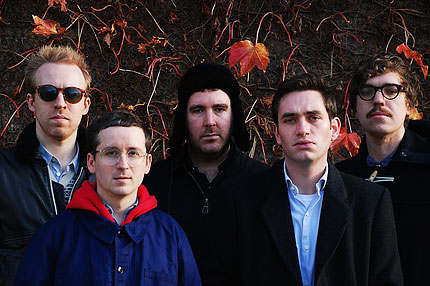 Welcome to the new weekly SPIN.com feature “Name That Band!” in which we get the inside stories behind the mysterious monikers of some of our favorite artists. (See past episodes of Name That Band! here.)

Why Hot Chip? “I remember Alex [Taylor] and I making the name up on the spot at a gig in our school’s theater when we were 15 or 16,” explains co-vocalist Joe Goddard. “We were using an old electronic organ and electric guitar and were playing some of our own songs and some covers: Spacemen 3, Pavement, stuff like that. We hadn’t even bothered to come up with a name yet. When we were done playing, someone asked who we were and we just said, ‘Hot Chip,’ which was a phrase we thought was funny at the time. We liked it because it was kind of pathetic. It’s essentially a stupid image: French fries, which are called chips in England. Basically, this is all a way of saying that the Hot Chip name began as an inside joke, and 15 years later it’s still our band’s name.”

Previously Rejected Names: “We didn’t have any band names before Hot Chip, but I was in a grunge band called Aerial, and Alex was in a band called the Sane.”

Best Band Names Ever: “The Germs. I like names that make it clear that the band isn’t too self-important or pompous. I also like Flaming Lips. It’s a nicely psychedelic image that fits well with what they do.”

Worst Band Names Ever: “There’s a band in the UK called Shit Disco. It sounds too much like it’s describing a bad night out at a club. I have enough of those in my life.”