Their about-to-be-released album, One Life Stand, might be an ode to enduring love, but Hot Chip’s weekend romp through NYC was a quick but brilliant fling: The British dance music specialists slipped into town, devastated audiences, then packed up and move on.

Even better, the British dance quintet’s Friday night show at the Highline Ballroom — their first proper gig in more than a year — was totally free for over 600 fans who endured an insanely cold New York night and lined up for complimentary tickets, as part of MySpace’s Secret Shows series. The crowd — largely college kids with enough free time to wait in line all day — was joined by an internet audience who watched a live stream of the gig and a setlist packed with eight of One Life Stand‘s 10 new songs.

That dependence on mostly unheard material slightly limited the set’s energy at the start, despite the buoyant nature of opening number “Thieves in the Night,” and the silken, earnest croons of Alexis Taylor on “Hand Me Down Your Love.”

But when the band launched into a subwoofer stretching reboot of their 2006 jam, “And I Was a Boy From School,” the room surged to life, writhing and bouncing in a gusher of ready-for-the-weekend euphoria. 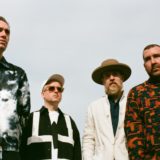 It was indicative of Hot Chip’s evolution over a decade-long career, from fairly shy and demure knob-twisting club nerds to festival-crushing dancefloor demigods capable of strong-arming even the most jaded of audiences into fist-pumping electro enthusiasm. There’s still a hefty pinch of dorktastic panache, best embodied Friday night by Taylor’s ensemble of yellow wife beater over yellow trackpants, a fashion choice that made the dimintutive but slightly muscular singer-keyboardist look like a shrunken version of Rocky’s Soviet nemesis, Ivan Drago.

A reworked version of the uplifting “Ready for the Floor,” off 2008’s Made in the Dark, was another assertive blast, utilizing a heavy, nearly cock-rockin’ intro for maximum frenzy induction. Later, the forceful come-on of Hot Chip’s most overtly spastic single, “Over & Over,” and its refrain about kissing, sexing, and poking elicited quite the eruption.

But the freshly conceived, softer songs began to come to life and stand confidently alongside more raucous entries in the Hot Chip catalog, beginning with title track “One Life Stand,” which the band performed the night before alongside the Roots on Late Night with Jimmy Fallon. While emblematic of the new album’s gentle touch, the live version of “One Life Stand” packed enough of a wallop to counterbalance Taylor’s monogamous plea: “I only wanna be your one life stand.”

Similarly, “Take It In,” the night’s final song featured singer-keyboardist Joe Goddard crooning about his heart flying like a dove, but the sweetness didn’t come off wimpy at all. Rather, it was Hot Chip proving that you don’t always have to bring it hard and fast to truly satisfy.

Encore:
I Feel Better
Slush
Take It In

hot chip, We Were There