The eccentric Brits take the virtual band to the virtual sphere with web-based role playing game. 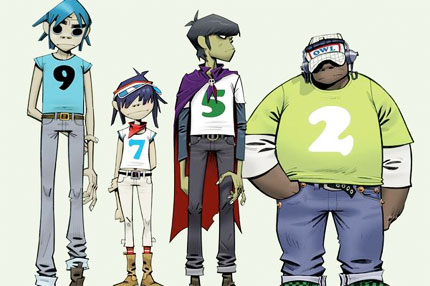 As is the style for Damon Albarn’s genre-bending, cartoon collective Gorillaz, their upcoming album, Plastic Beach, is being promoted with loads of digital goodies. Today, the band tweeted a link to an online video game based on Plastic Beach — and it’s worth checking out.

The action-adventure, playable on Gorillaz site, is set on a post-apocalyptic beach and loaded with crude humor, allusions to Fantasy Island, ambient dub sounds, and Gorillaz’ own special brand of cyberpunk sprinkled over every pixel. The action is controlled by an iPhone-looking widget at the bottom of the screen referred to as the “GOD device.”

The virtual island setting is home for each of the band members, including Murdoc, who recently landed in our Follow Friday column thanks to his stellar tweeting habits. As players follow talking seagulls and collect clues through elevator shafts and dark passageways, they explore the Gorillaz universe as much as any “real” person could ever hope.

The album itself — out March 9 — will include loads of special guests including Snoop Dogg, Lou Reed, the Bee Gees’ Barry Gibb, the Fall’s Mark E. Smith, and the Clash’s Mick Jones and Paul Simonon. Check out “Stylo,” a collaboration with rapper Mos Def, right here.

Gorillaz are set to headline the final night of this year’s Coachella Valley Music & Arts Festival on April 18 in Indio, California sharing the bill with Spoon, Thom Yorke, and the reunited Pavement.