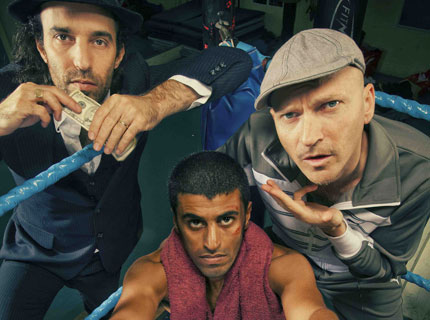 Self-produced and recorded in Tel Aviv and Belgrade, Serbia, the song melds Eastern European musical elements with dub rhythms and hard-charging lyrics that bemoan the world’s never-ending cycle of violence — something very familiar to the band as natives of Israel. MC Tomer Yosef explains: “We want people to understand that we are part of a loop of war and violence that is happening forever, and it’s up to us to get out of it.”

Balkan Beat Box will hit the road this spring with a string of dates across the U.S. beginning March 11 at the Paradise Rock Club in Boston and ending March 17 in Seattle. They will also play SXSW in late March. Check out the schedule on the band’s MySpace page.

What do you think about the song? Are you motivated to rid the world of social injustice or simply prompted to shake your lady lumps? Or both?!