"Art Czars" is the first of five limited-edition singles the duo will release this year. 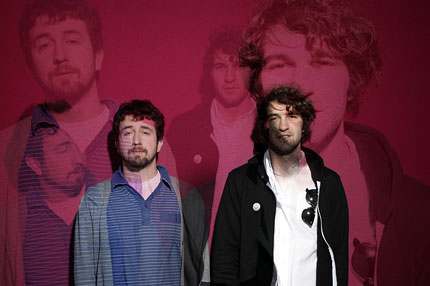 Vancouver, Canada, guitar-drum duo Japandroids have been touring steadily since last June in support of their SPIN-approved debut Post-Nothing, but that isn’t stopping them from releasing new music. “Art Czars” — listen or download below — is the first of five 7″ singles they plan to produce this year.

Each single will pair a previously unreleased song from the Post-Nothing sessions with their cover version of a favorite track. In this case, Big Black’s “Racer X.” The single, out April 13, will be limited to 2000 vinyl copies, but is also available digitally. You can preorder here.

“Art Czars” is a sneering, fuzzy garage romp with recurrent chants like: “Here’s your money back/ Here’s your punk rock back.”

Pay attention: As SPIN.com guest columnist Mark Hoppus of Blink-182 put it, “”There are a lot of two-piece acts out there right now and some are really great, but Japandroids just sound really different from anything out there.”

Japandroids are currently touring Europe, but will play SXSW in March and continue across the U.S. until late April, before hitting Bonnaroo in June. See complete tour dates at their website.

And tell us what you think of “Art Czars” in the comment section.