The song drops March 30 on Evelyn Evelyn’s 12-track self-titled debut (via Eleven Records), and according to a statement, it’s certainly no “Smells Like Teen Spirit.” In fact, Evelyn Evelyn describe “My Space” as quite the opposite: “an anthemic 80’s power ballad.” 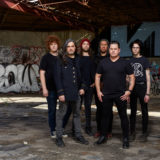 This is all… a little weird, right? Well, it gets weirder.

Palmer and Webley have created a fictional back story for Evelyn Evelyn, claiming the band is actually fronted by a duo of conjoined twins.

As they describe it:

“Twins Lyn and Eva Neville were born in 1985, and their mother died during childbirth. When they were 11, they joined Dillard and Fullerton’s Traveling Circus, which does not appear to be a thing that exists in real life. After a while, the twins decided to leave the circus and pursue a music career, and Palmer and Webley discovered them via MySpace and decided to help them release music.”

To complement the album, Dark Horse will release a graphic novel about the twins’ life, illustrated by artist Cynthia von Buhler.

And that’s not all. Evelyn Evelyn have an upcoming tour scheduled this spring, including two Boston dates in April (a full U.S. tour is expected in May). Will the twins, who would be 25 years old now, show up?