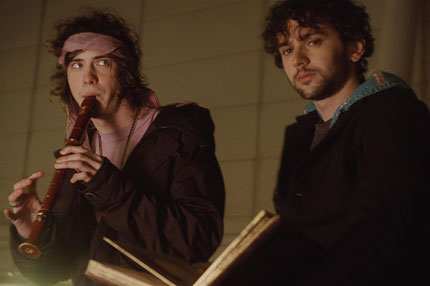 Mark your calendars, Blackberries, iPhones, iPads, or just write it on your damn hand — ’cause now it’s officially official: MGMT’s second album, Congratulations, will release in the U.S. on April 13.

The release is the group’s first since their 2007 breakout debut, the catchy and psychedelic Oracular Spectacular — which landed MGMT on the cover of SPIN.

“It’s definitely going to shock people,” Vanwyngarden recently told SPIN.com of the new album’s sound. “We dropped any sort of irony that was on the first record, and Congratulations feels true to who we really are.”

Congratulations’ nine songs are “sequenced to flow with sonic and thematic coherence.” And according to Vanwyngarden, the album moves from “Lady Dada’s Nightmare,” a “very nightmare-ish sounding” instrumental track inspired by the “Poker Face” pop star, to “Congratulations,” a song written about fame and the “worldwide economic crisis.” Through it all, he said, there’s one unifying influence: surfing, a sport he picked up while recording in Malibu.

“There’s a surfing thread throughout the record,” he explained, citing another new song, called “It’s Working.” “When you’re surfing, there’s a specific break you’re paddling to. And when the waves are really good you say, ‘It’s working.’ The song kind of has a surf-y vibe. It’s like surfing on ecstasy!”

The ocean’s influence on Congratulations is also evident on MGMT’s website, which features an image of a beach with crashing waves and, in the upper left corner, a timer counting down to the album’s release date.

Another album track “Siberian Breaks” is a 12-minute-long tune that’s “like eight different songs strung together into one, and the general theme is about surfing in the Arctic Circle by Russia,” Vanwyngarden explained.

As previously reported, MGMT debuted a pair of songs during their late-night set at Bonnaroo last June — an untitled piano-led track that recalled the bright psychedelia and flowing arrangements of the Zombies’ Odessey and Oracle, and the album’s title track, a more standard MGMT fare (catchy synths, sing-along vocals).

Currently, MGMT have only two live concerts scheduled: an April 17 appearance at Coachella and a May 2 gig at New Jersey’s Bamboozle fest.

A full tour in support of Congratulations is expected to be announced soon.