With her career -- and her family -- at stake, the Hole leader makes a bold move with her controversial new record. 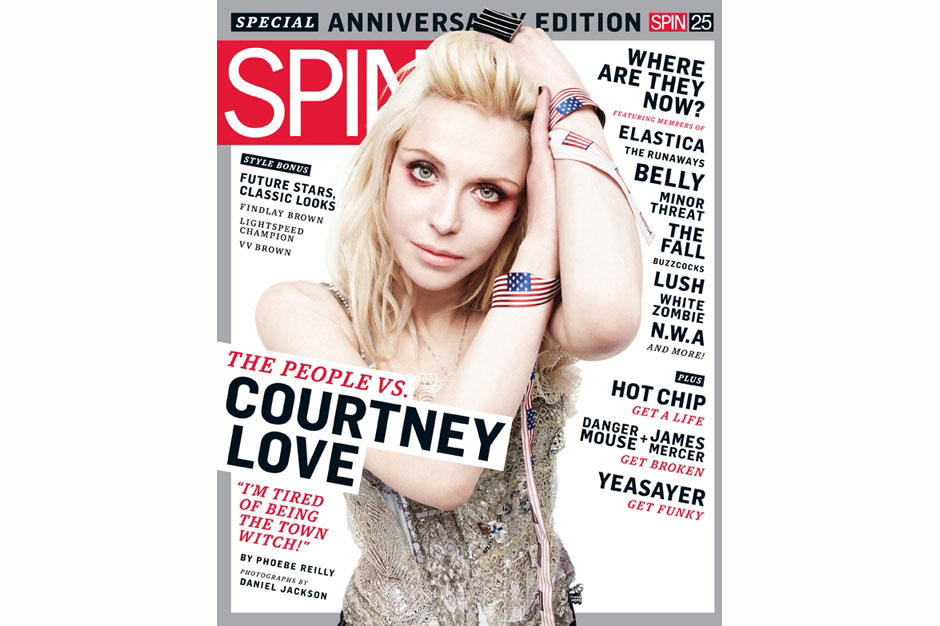 “Are you on anything?”

Courtney Love pauses suddenly from her simultaneous sewing, smoking, and theorizing about how the only way to be successful by the age of 25 is to forget that you have parents and grills me about the contents of my bloodstream.

It’s the week before Christmas and we’re sitting at the kitchen counter of the spacious, modern Tribeca loft she’s rented from a Russian supermodel for the past three months, currently cluttered with “kook”-the word Love gives to the lacy fabrics and bric-a-brac she dyes or fixes or glues until they look like something belonging to Miss Havisham. Doing so relaxes her, and she is famously difficult to relax.

I’m not on anything.

“Then why are you shaking?”

Because several windows are open and it’s freezing outside, so I feel like Demi Moore at the end of St. Elmo’s Fire.

“So you don’t take any meds?” she persists. Okay, Ambien, sometimes.

“I thought so,” Love says, satisfied. “I can’t sleep either. I took Ambien for a few years, but I hated waking up with fucking eggs Benedict on my face and a 1,000-page letter I didn’t remember writing. You should switch to Sonata.”

And who would know better? When I arrived earlier this evening, Love’s first order of business upon stepping out of the shower was to greet her psychopharmacologist, who dropped by unannounced to make sure everyone in the Love-Cobain residence, as it’s referred to by the housekeeping service, had what they needed. After consulting her roommate and guitarist, the reedy, handsome, British 23-year-old Micko Larkin, Love dismissed the doctor with a simple “We’re good.”

During the past decade, sundry cracked-out antics, including an OxyContin OD in front of her daughter, fueled macabre speculation regarding Love’s mental state. And just recently, a Los Angeles court awarded guardianship of 17-year-old Frances Bean to Love’s late husband Kurt Cobain’s mother, Wendy O’Connor, and sister, Kimberly Dawn Cobain, amid rumors of domestic abuse. Love’s coping mechanism is, as ever, pure manic energy, which is not to be confused with productivity.Read More of SPIN’s Interview with Courtney Love >>

Though she has been a dedicated provocateur and a lightning rod and a cultural sensation and a cartoon villain for nearly 20 years, it’s been more than half that long since anyone could consider Courtney Love a working musician. Despite some decent reviews for her 2004 solo debut, America’s Sweetheart, Love calls the record “a total disaster” and admits she was too wrecked to promote it.

But for her, survival means making music. During a 2005 stint in rehab, she began work on what would become her new album, Nobody’s Daughter, relying heavily on what she calls “the kindness of strangers”-in reality, the efforts of perfect nonstrangers, like America’s Sweetheart collaborator Linda Perry, Billy Corgan, and producer Michael Beinhorn-all of whom have since distanced themselves from the project.

So it’s not surprising that the album took five years to materialize. Nor is it surprising, in this moment of big-bucks ’90s-reunion fever, that she is dusting off the Hole moniker for the first time since 1998’s Celebrity Skin (also produced by Beinhorn), even though none of Love’s former bandmates are involved. What is surprising, though, is that Daughter is pretty great-uneven, but raw and cathartic in ways her detractors could appreciate.

“One time, Frances was being mean and said, ‘What are you going to do if the record fails?’ ” says Love, lighting a cigarette on her stove. “Well, Frances, it can’t fail because I love it, and I’ve worked really hard to make sure that I love it.”

Her eyes fill with tears at the mention of her daughter’s name. Dressed all in black, her hair damp and her face free of makeup, the 45-year-old Love looks genuinely distraught and yet eerily composed.

Her face bears no trace of her former wide-eyed, knobby-nosed vulnerability, and her taut, altered features don’t quiver easily. A woman who just moments ago proclaimed “Rock’n’roll is a fucking vacation from my life” is quickly reminded of the reality that has plagued her music career: Vacations are, by nature, temporary.

She shakes her head. “I’m lost in a fucking nightmare maze.”

Read the complete cover story in the March 2010 issue of SPIN, on newsstands now!