VIDEO: The Paramore frontwoman sings "Say It Ain't So" with Rivers Cuomo and Co. in Florida. 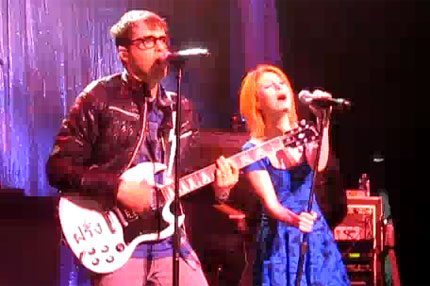 Weezer returned to the stage Wednesday night for the first time since a December tour bus crash left frontman Rivers Cuomo with five broken ribs — and the power-pop band brought along a secret weapon for the occasion: Paramore singer Hayley Williams!

Cuomo, who was recently issued a clean bill of health from his doctors, invited Williams onstage at a private gig for students of Florida State University in Tallahassee, FL, to belt “Say It Ain’t So,” a classic from Weezer’s self-titled 1994 debut, a.k.a. The Blue Album.

The selection was only fitting: Williams, now of legal drinking age having celebrated her 21st birthday just last month, ripped through the song’s verses about alcohol: “Somethin’ is bubblin’ behind my back/This bottle is ready to go.” Dressed in her fanciest blue prom gown, Williams shouted in unison with Cuomo on the chorus, and taunted the bespectacled frontman as he shredded through the song’s solo. RAWK.

Watch video of the special performance below, then tell us what you think in the comment section.

WATCH: Weezer and Hayley Williams, “Say It Ain’t So”