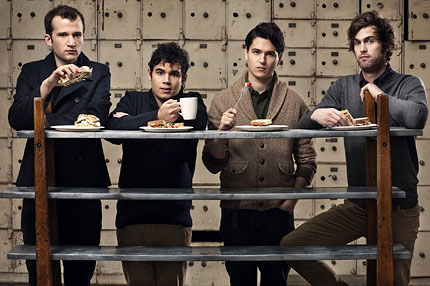 The New York band’s second album, Contra, debuted in the No. 1 spot on the Billboard 200 chart, selling 124,000 copies to trump last week’s chart-topper, Ke$ha’s Animal (now No. 3), and Susan Boyle’s steady-seller I Dreamed A Dream (now No. 2). VW’s triumph also marks the 12th time an independently distributed album has topped the Billboard 200 chart since 1991.

Contra is the follow-up to Vampire Weekend’s 2008 self-titled debut, which sold only 28,000 copies in its opening week — but has since moved 498,000 copies worldwide, Billboard reports.

In SPIN’s four-star review of Contra, contributing writer Jon Dolan called the album “fully formed, a ’70s-style record-type record. It’s their version of the Talking Heads’ More Songs About Buildings and Food, the disc on which they see how well their gold-star ideas move.”

The four Ivy League boys of Vampire Weekend shot to success thanks to rapid online buzz, a trajectory that was chronicled in SPIN’s March 2008 cover story. Their ascent was rapid: In fact, the band was the first to ever be shot for a SPIN cover before they’d even released an album.

Vampire Weekend will support Contra this spring with an extensive tour of Europe and North America, which the boys kicked off last week in Los Angeles. SPIN contributor Chris Martins reported from Hollywood’s Henry Fonda Theater: “The Contra songs were the most exciting… demonstrating Vampire Weekend’s equal proclivity for indulging eccentricities and crafting instantly catchy tunes.”