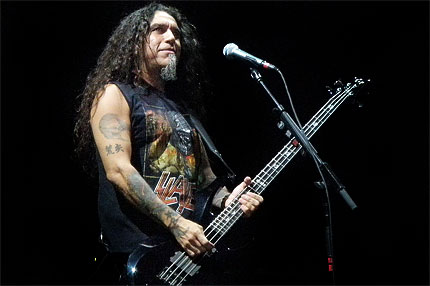 Just months after Slayer postponed a handful of Canadian tour dates due to singer/bassist Tom Araya’s back problems, the Huntington Park, CA, metal band has been forced to scrap all 49 dates of their U.S. and European Carnage Tour with Megadeth and Testament this spring. The reason: Araya’s back problems just won’t go away.

“Tom gave various medical treatments more than a fair shot,” Slayer’s manager Rick Sales explained in a statement. “But they just haven’t handled the problem, so he’s biting the bullet and is scheduled for back surgery at the end of this month.”

“As unfortunate as this is for so many people — the Megadeth and Testament camps, the concerts’ promoters, and, of course, the fans — Tom’s health is the number one priority, and this has to happen,” Sales added.

The extensive tour in support of their new album, World Painted Blood, was set to kick off in Seattle on Jan. 18 and continue across the U.S. and Canada, before crossing the Atlantic to Europe in March and April. Both bands’ camps are working to reschedule the shows now; all ticket holders are urged to await further information.

According to the statement, Araya’s back troubles began during Slayer’s tour of Australian, New Zealand, and Japan last October. He was soon diagnosed with Cervical Radiculopathy, and attempted to treat the condition with non-surgical procedures. But the 48-year-old rocker — who is renowned for his whiplash-inducing stage antics and head-banging — continued to experience severe pain, numbness, and muscle spasms, forcing him into surgery in an attempt at a full recovery.