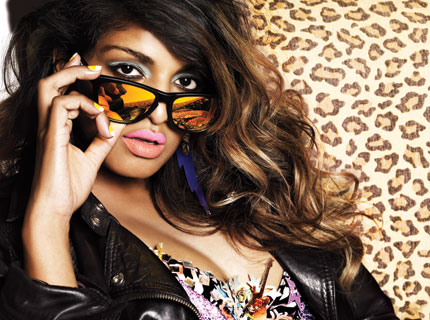 M.I.A. loves Twitter. So far this week, she’s taken to the social networking site to attack the New York Times and sound off about the civil war in her native Sri Lanka. But Tuesday night she Tweeted something a little, well, less bloody: a new song and video!

The video and song are accompanied by a short phrase (“THERES SPACE FOR OL DAT I SEE,” in her all-caps style, naturally), and according to the Fader, the song is called “Space Odyssey” and will appear on her upcoming album. The video, meanwhile, shows the singer dancing beneath a kaleidoscopic green strobe light.

Musically it’s classic M.I.A.: the four-minute tune opens with a loud siren, then drops into a slow electro beat as the girl born as Maya Arulpragasam rap/sings, “Gravity is my enemy / Stars that are bright get close to me / There’s space for all that I see.” And at the clip’s end, the logo for M.I.A.’s label N.E.E.T. pops up onscreen.

As previously reported, M.I. A. is working on her “really odd” release with her production partners Diplo and Switch, plus Baltimore-based DJ Blaqstarr, who caught M.I.A.’s attention thanks to his work with her protégé, Rye Rye.

Check out the video and song below, then tell us what you think in the comment section.