Read the latest twisted turn in this on-again off-again affair. 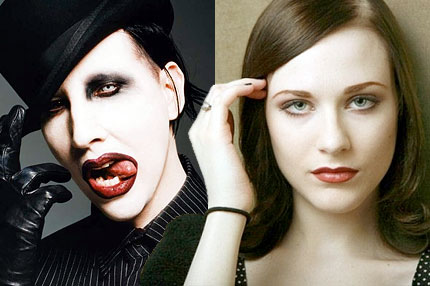 Just one month after on-again-off-again lovers Marilyn Manson and Evan Rachel Wood reconciled, the shock rocker proposed to the 22-year-old actress — and she said “yes”! Her parents must be delighted.

According to the U.K.’s Mirror, Manson popped the question to Wood Tuesday night while onstage performing a concert in Paris. The date, January 5, was also his 41st birthday.

Like everything Manson, the engagement is a little shocking — and not because of the couple’s 19-year age difference, or the rocker’s newfound proclivity for “snorting sea monkeys.”

Last Spring in a juicy interview with SPIN.com, Manson had a few not-so-nice words for his ex: “I have fantasies every day about smashing her skull in with a sledgehammer,” the make-up clad Los Angelo said.

Not long after, Manson even released a gruesome music video for “Running to the Edge of the World,” an emotional ballad from his SPIN-praised album The High End of Low, in which he locks a nearly-naked young girl in a hotel bathroom, then beats her bloody. The girl’s resemblance to Wood is more than coincidence.

For Wood, all this sickening violence is apparently forgivable. But we still have a qualm: who wants to marry someone with Swine Flu? Gross.