Singer teams with two ex-Oasis bandmates, plans to hit studio in April, hopes he won't "balls it up." 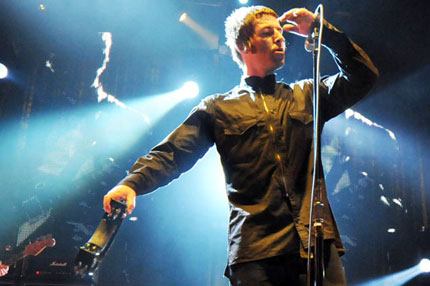 Liam Gallagher and two of his former bandmates — armed with eight already-written songs — plan to hit the studio in April as part of their push towards a new, post-Oasis career.

“We’re going in [the studio] in April with a producer, we’re going to do three songs with him and if he doesn’t balls it up and we don’t balls it up then we’ll go in and do the whole album with him,” the ever-candid Liam told UK radio outlet XFM (via NME).

The “new” band (featuring Liam, guitarist Gem Archer, and bassist Andy Bell) has been working together since the fall — Oasis announced their split in August — and while Gallagher suggested he might continue under the Oasis name, the trio remains officially nameless, for now.

In the interview, Gallagher said he was frustrated that Oasis only put out seven studio albums during their 16 years as a band. “I just think it’s poor, really,” Liam said. “Obviously Noel [Gallagher] wanted a bit of time off and we don’t. The band split in August — we was in the studio in November ‘cos we’re mad for it.”

Noel, meanwhile, is pursuing a solo career, and recently announced he’ll be moving back to his hometown of Manchester after living in London for some time.