Killers to Take a Break

Guitarist Dave Keuning says band is about to play "last shows for a while." 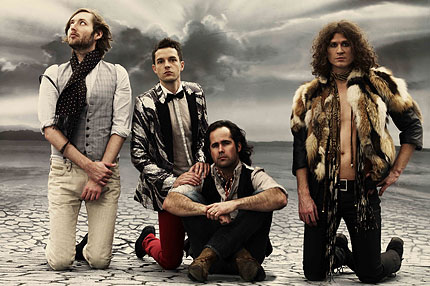 Citing burnout, guitarist Dave Keuning recently told the Australian Associated Press that the Killer’s gig at the Good Vibrations festival in Sydney, Australia, on February 13 would likely be the superstar quartet’s “last shows for a while.”

When asked if the break was permanent, Keuning replied, “not as far as I know.”

“It’s like people expect us to [tour and record] non-stop till we die,” continued the curly-haired axe-man, “but we just want a little bit of time off, just to be myself and do what I want to do for a little bit.”

Brandon Flowers and Co. have been looking forward to a break since at least last April, when an “insider” was reported as saying the band is “sick of the sight of each other.”

Back then, a spokesperson said the talk of bad band vibes was all bunk, but if the Las Vegas pop-rockers do take an extended break, Brandon Flowers will be hard-pressed to knock Led Zeppelin and Nirvana off their rock god pedestals.