In a Sundance interview, the rocker raves about Kristin Stewart and Dakota Fanning's work in the upcoming biopic. 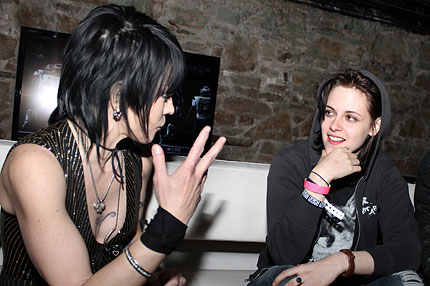 Rocker Joan Jett couldn’t be happier with the way she’s been portrayed by Twilight star Kristen Stewart in the new Runaways biopic, which premiered at Sundance over the weekend to massive hype.

“She’s authentic,” Jett said in a Sundance interview with Cinema Blend. “I don’t mean to put words in her mouth, but what I get is she feels she has to do it justice. She knows the Runaways have fans, she knows I have fans, and she was concerned about being authentic.”

Jett also raved about the singing abilities of Stewart and Dakota Fanning, who plays Runaways singer Cherie Currie, in the film — the voices fans will hear in the live performance scenes belong to the actresses themselves. “When you see Kristen singing, that’s really her singing,” said Jett. Same thing for Dakota and Cherie. I think they did an incredible job. I was very proud.”

The 51-year-old singer-guitarist was also shocked to discover how much she had in common with the 19-year-old Stewart. “When you see us together physically, the energy is so similar,” Jett said. “The way we move, the way our hands move and our hair, the way we talk, we start and don’t finish sentences.”

Despite the kinship, Stewart didn’t find it easy to channel the energy of the groundbreaking rock star, who, with the tough-as-nails Runaways, scorched many stereotypes of how women had to behave in a rock band. “Everybody knows Joan Jett, but nobody really knows how hard it was to become her,” Stewart told the UK Press Association.”We’ve grown up being told that we, us girls, can do whatever we want, and that just wasn’t the case for them.”

The film was one of the hottest titles as Sundance kicked off over the weekend. Stewart and Fanning watched as Joan Jett and her band took the stage Saturday night at a SPIN-sponsored bash. The Runaways screened at the festival the following night, and initial reviews have been quite favorable.

Check out a trailer for The Runaways here. The movie hits big screens nationwide on March 19.