How They Became… Frightened Rabbit

Scott Hutchison of Frightened Rabbit shares the story behind his band's name. 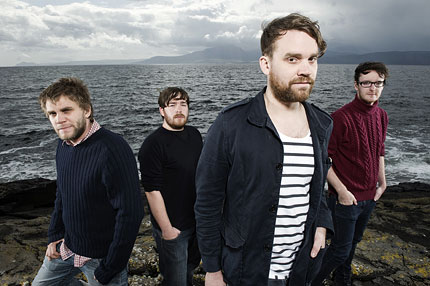 Welcome to the new weekly SPIN.com feature “Name That Band” in which we get the inside stories behind the mysterious monikers of some of our favorite artists.

Why Frightened Rabbit?: “When I first started playing,” says singer-guitarist Scott Hutchison, “I was a solo act and, unfortunately, Scott Hutchison is not a catchy band name at all. I thought of Frightened Rabbit because it was a nickname given to me by my mum when I was younger. I was incredibly shy as a child, almost chronically so. My parents would take me to their friends’ houses and I’d be expected to play with their kids — I guess the idea was to socialize me — but I had no interest. These kids weren’t my friends. Why did I have to play with them? I’d end up just sitting silently by myself.

So out of that, my mum called me her frightened rabbit. When I started to play with the other guys in the band, we didn’t bother finding a new name.”

Previously Rejected Names: “Coming up with a new band name was such a low priority for us that we never even had a discussion about different names. We just immediately went with Frightened Rabbit. But back in high school I had a reputation as someone who came up with terrible names. Nixon was one that I remember. I also thought of the Rolling People, which is epically bad.”

Worst Band Names Ever: “If Nirvana had been a bad band that would’ve been a terrible name. Grunge in general had some bad names: Soundgarden, Pearl Jam. Thankfully those bands turned out to be good, so no one really cared about how strange the names were.”