How They Became… the Disco Biscuits

For the first time, Marc Brownstein of the Disco Biscuits shares the story behind the band's name. 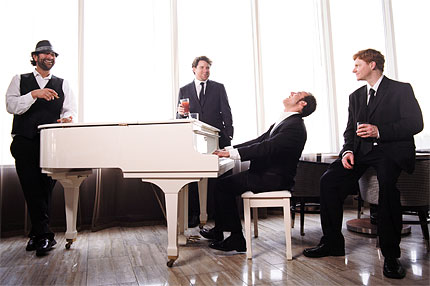 Welcome to the new weekly SPIN.com feature “Name That Band!” in which we get the inside stories behind the the mysterious monikers of some of our favorite artists.

Why “The Disco Biscuits”?: “I’ve never told anyone the real story before,” says band leader and bassist Marc Brownstein, “but I think after fourteen years, it’s time to reveal the truth. So here it goes: When the band started out we were all students at Penn, and we had this idea that we’d change our name constantly. We’d be called one thing one night, then another thing the next night. Somehow the idea caught on. Everyone on campus knew who we were. Then little by little we were like, ‘Wait, if we want to actually have a career, changing our name all the time is not smart at all!’ So we were kinda stuck.

Then we were headed out to the Jersey Shore one weekend for this huge party. We were sitting in our car and one of our friends — totally out of the blue — says, ‘Hey, you guys wanna go find some Disco Biscuits?’ We were like ‘Boom! That’s the name.’ At the time I didn’t know what Disco Biscuits even meant — the dude was looking for Quaaludes. That shows how old we are because nowadays Disco Biscuits is slang for ecstasy. Part of the reason I never told that story before is because there was a time when we didn’t necessarily want to be associated with the drug reference. But that didn’t hurt the Rolling Stones, so I think we’ll be okay!”

Previously Rejected Names: “There were a bunch that I can’t remember anymore, but I definitely know that we used Party Tent and Zex Sea.”

Best Band Names Ever: “Radiohead is the name of all names. Arcade Fire, too. Actually, when I was growing up the arcade where I used to hang out all the time burnt down. So that name has some special meaning for me.

Worst Band Name Ever: The String Cheese Incident guys are friends of mine, but I gotta say that their name is not cool in the slightest.”